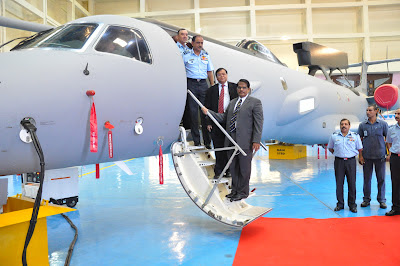 Dr Vijay Kumar Saraswat, SA to RM, Secretary Defence R&D and DG DRDO, at a function organised to commemorate the formal receipt of the AEW&C India aircraft by Centre for Airborne System (CABS) the DRDO laboratory spear heading the AEW&C programme, congratulated the AEW&C team from DRDO, IAF, CEMILAC, DGAQA, and the EMBRAER team for this significant achievement, and said, “The programme involves installation of the systems on the aircraft, integration of these systems and & make the system perform to its fullest capability meeting the user aspirations” said Dr Saraswat.  He further stated, “The ultimate milestone – the delivery of the fleet of AEW&C System to the Indian Air Force is not only our goal but also a dream for DRDO. The indigenous AEW&C System based on projections by the IAF and built on the EMB-145I by DRDO has incorporated more operational capabilities than contemporary systems of its class”.
Air Chief Marshal NAK Browne PVSM AVSM VM ADC, Chief of Air Staff, Indian Air Force was the chief guest in the function in which the aircraft was formally received in CABS. Speaking on the occasion, he said he was personally very satisfied with this significant milestone in the programme which was not, and still is not, an easy programme. He said the AEW&C programme is the starting point for much larger, more complex projects such as AWACS India programme.

Airborne Early Warning & Control (AEW&C) System the India’s Indigenous programme got a boost with one major milestone achievement when the first aircraft fully modified by M/s EMBRAER with more than 300 mission system items supplied by Centre for Airborne System [CABS], landed in Bangalore HAL Airport on 22 Aug 2012. The indigenous AEW&C System is a multi-sensor system providing for all aspects of Airborne early Warning & Control in today’s defence scenario.

Earlier, while welcoming the gathering Dr S Christopher, Distinguished Scientist, Programme Director AEW&C System & Director CABS informed that after the operational requirements were firmed up between DRDO & IAF in 2007, the contract for three modified aircraft was finalized in August 2008 with M/s EMBRAER, Brazil. The present air craft is scheduled to go for 'shake down' trials in the coming week. It will take about a year for completing the integration and development flight trials. Shri G Elangovan, Distinguished Scientist and Chief Controller R&D (Avionics & Aeronautics), Air Marshal Rajendra Singh CinC HQ Training Command, AVM Nambiar Commandant ASTE, Directors of other DRDO Labs & DRDO HQ, Senior Officials of M/s EMBRAER Brazil, other dignitaries from DRDO,  IAF & Former Directors of CABS were present on this occasion.