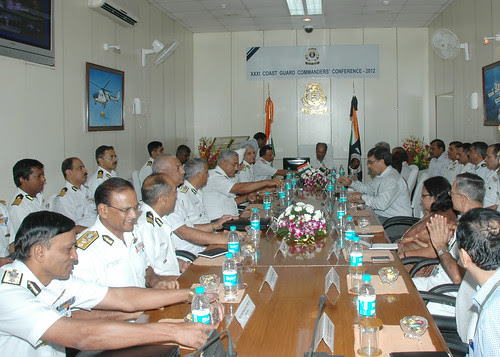 The 31st Annual Coast Guard Commanders’ Conference was inaugurated by the Hon’ble Raksha Mantri Shri AK Antony at 0900 hrs on 20 Sep 12 at New Delhi. The conference has been scheduled for three days and will help the Coast Guard Commanders in analysis of the operational capabilities, deployment of forces and preparations for the future challenges. The Commanders will introspect the standards achieved in the wide spectrum of Coast Guard responsibilities.

Speaking at the inauguration, the Hon’ble Raksha Mantri Shri AK Antony complimented all the Coast Guard personnel for their commitment, courage and involvement while discharging their duties. He highlighted that issue of coastal security will continue to occupy a prominent position in our national security matrix. The role of fishing community is vital in strengthening of coastal security mechanism. Community interaction programmes to be given impetus in order to sensitize the fishing community on the prevailing security situation and to develop them to be the “eyes and ears” for intelligence gathering.

The Director General, Indian Coast Guard, Vice Admiral MP Muralidharan, AVSM, NM in his address highlighted the progress made by the Coast Guard in acquisition cases of various types of ships and aircrafts, development of infrastructure, induction of manpower in the service and enhanced efforts for surveillance of the coast and the sea areas. 01 PCV, 04 IPVs, 02 ACVs, 01 IB and 04 ICs have been inducted into the service. The Coast Guard aims to achieve a force level of 150 surface platforms by the year 2018.

01 RHQ (North East) and 05 Stations (ICGS Dahanu, Androth, Krishnapatnam, Karaikal & Kolkata) have been established till date. The remaining 06 sanctioned stations at Pipavav, Nizampatnam, Gopalpur, Frazerganj, Mayabunder & Kamorta are slated to be established by Mar 2013. One Dornier Squadron has been established at Porbandar since the last Commanders' Conference. Establishing of 02 Air Stations, 05 Air Enclaves and 04 Dornier Squadrons has also been prioritized.

Coast Guard has been putting up concentrated efforts towards setting up of Coastal Surveillace Network (CSN) and as a part of this CSN network Maharashtra cluster, Gujarat cluster and Kerala cluster has been commissioned. The setting up of CSN will enhance the electronic surveillance capability of the Coast Guard. The surveillace Network is an important component of coastal security mechanism, which will ensure identification and monitoring of maritime traffic. The phase – I of project is envisaged to be completed on Mainland and Islands by end Oct 12 and Mar 13 respectively.

During the last one year, a total of 348 precious lives were saved, out of which 210 lives were rescued by Indian Coast Guard independently and remaining 138 lives were saved in coordination with various maritime agencies. The coastal security mechanism has been fine tuned for optimum response to maritime threats through regular exercises & operations. 67 Coastal Security exercises and 58 Coastal Security operations have been conducted in consultation with Central/State agencies.