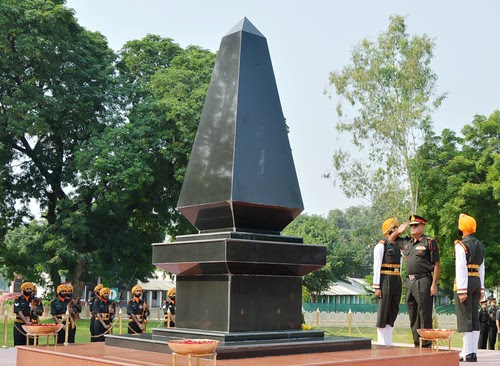 4 DIV 1, a photo by Chindits on Flickr.
It is a proud day for Indian Army as well as the nation as its oldest fighting formation, the 4 RAPID(Strike) division also known as the Red Eagle Division celebrates its 74th anniversary and steps into the year of Platinum Glory. The Celebrations started with the remembrance of the brave predecessors of the division at the War Memorial, who have made the supreme sacrifice for the nation. The General Officer Commanding (GOC) of the division, Major General GS Chandel, Yudh Seva Medal laid wreath at the War Memorial and paid homage to the brave soldiers of the division in presence of Officers, Junior Commissioned Officers (JCOs) and jawans.

The Wreath Laying ceremony was followed by a Sainik Sammelan. Maj Gen GS Chandel, YSM, spoke about the division and its exploits right from the time of Second World War upto its operations in the modern era. He brought out that it is the devotion to duty and sacrifice of each soldier that has earned the division a pinnacle position in the annals of military history. He emphasised on the endeavour of each individual to uphold this glorious history of the division with their utmost devotion and dedication to duty. This, he assured, will ensure even greater glory in the days to come.

A brief comparison of the times gone past, the present and the times to come was analysed by the GOC during his address. He enlightened the gathering on tackling the important personal and professional events in life requiring a thoughtful solution. The General was confident in promising that the division will always be prepared for any eventuality threatening the unity, integrity and sovernity of the nation. After the brief address, the GOC took the opportunity to felicitate the jawans who have shown exemplary dedication to their work by giving them prizes. The event culminated with a high tea in which the GOC had an informal interaction with the officers, JCOs and jawans.

All said and done, the celebration of the Red Eagle division as it steps into its 75th year was very well organised and co-ordinated, as can be expected from the oldest division of the Indian Army. The warmth of unity and bonding could be felt in the air throughout the celebrations.