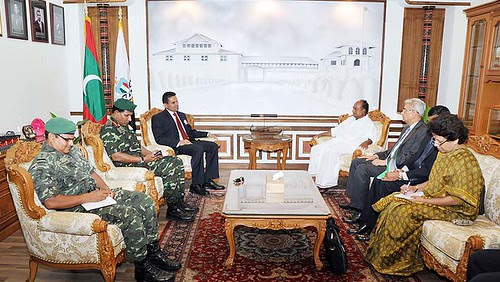 Call on Defence Minister - 16.09.2012, a photo by Chindits on Flickr.
India and Maldives today agreed on a slew of measures to step up their cooperation in defence and security related issues. The two sides also agreed to work closely towards stability in the region and ensure maritime security in the Indian Ocean. At a high level meeting between the Defence Minister Mr AK Antony and his Maldivian counterpart, Col (Retd) Mohamed Nazim in Male’, the two sides decided to ‘maintain close cooperation in unitedly fighting against challenges of terrorists and non- state actors.

“The Maldives will stand side - by- side with India to ensure that maritime security of Indian Ocean is ensured; that the stability in the region is maintained; and above all, that the threats that our two countries face, particularly from terrorist groups andother non-state actors are eliminated”, said Mohamed Nazim. He also said the change of governments will not affect the traditional friendship between the two countries. “Governments will change both in the Maldives and India. Yet, the enduring friendship thatexists between the two countries will only improve and expand.”

Mr Antony conveyed the government’s decision to position the ALH Dhruv helicopter, handed over by India in 2010, for a further period of two years beyond April 2012. He also informed that the helicopter had been upgraded with night flying capabilities during the recent overhaul at HAL Bangalore. It may be recalled that the handing over of the helicopter to the Maldives in April 2010, was a major milestone in the defence cooperation between the two countries. Mr Antony said that a team of Qualified Flying Instructors will now be deputed to train Maldivian Air Wing personnel. In addition, India will also provide simulator training to Maldivian helicopter pilots at HAL, Bangalore. To a request from Mr Nazim for an additional ALH for deployment in the Northern Province for Medical evacuation purposes, Mr Antony assured him that he would try to fulfill this request at the earliest.

Marking a new high in the defence cooperation between the two countries, New Delhi has decided to station a Defence Attache at Male’. The gesture was appreciated by Mr Nazim who said that the move will help in enhancing and streamlining the dialogue process. Mr Antony also conveyed India’s support for the construction of the Maldivian National Defence Force Building.

The two sides appreciated the current efforts of the Indian Navy ships and aircraft in providing surveillance of the EEZ, on a monthly basis, in view of the incidents of piracy occurring close to Maldives and Lakshadweep and Minicoy islands. Apart from the mutually agreed schedule, India is also providing EEZ surveillance assistance on specific requests from the Maldives national Defence Force (MNDF) in case of special incidents like piracy attacks, threat to coastal security etc. Mr Antony assured his Maldivian counterpart of India’s continued support for these operations.

Moreover, on a request from the Male’, India has decided to position an Indian Navy Afloat Support Team at Maldives for a period of one year to help in smooth functioning and operations of the latter’s fleet and help in training their personnel for future maintenance operations.

Mr Antony said the joint exercises between our Armed Forces are also contributing to better understanding and cooperation. He said, the next Joint Army Exercise, Ekuverin, is planned for November 2012.
Referring to the maintenance of peace and security in the Indian Ocean Region, Mr Antony said the maritime forces of both countries should work together not only for the sake of safety for maritime trade but also to prevent disruptive forces from engaging in activities which may threaten peace in our countries.
Military Hospital Opened

Earlier in the morning Mr Antony and Mr Nazim inaugurated a military hospital ‘Senahiya’ in Male. Describing it as a ‘shining model of how two friendly neighbouring countries can collaborate and cooperate to create facilities aimed at benefitting their people, Mr Antony said it’s another milestone symbolizing the bonds of the close friendship between both our nations and in particular, between the Armed Forces of both countries.

He said a team of two medical officers and four para medical staff from the Indian Armed Forces Medical Services will be stationed at the hospital to work with the Maldivian authorities in setting up the services. He assured of India’s continuing support and partnership in this project.
Guard of Honour

Shri Antony was given an inter-services guard of honour, prior to the talks. He was also accorded the rare honour of being ushered into the Ministry of Defence building with honour guards holding a ceremonial umbrella over him.