IAF Mi-17 In Assam For Flood Relief And Rescue Mission 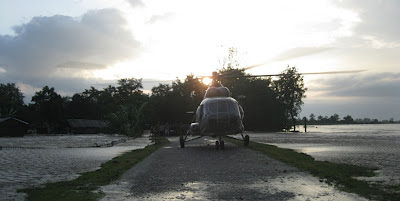 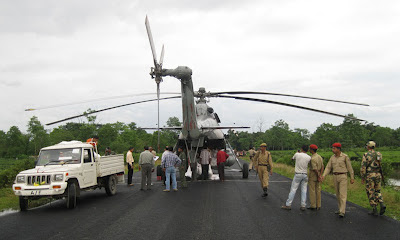 A Mi-17 helicopter from the ‘Siachen Tigers’ unit got airborne from Mohanbari and landed on a makeshift helipad which was made by marking ‘H’ on the national highway by-pass of Tinsukia town road after blocking the road from both sides as excessive rain throughout the past week had caused flooding of the regularly used helipad. After switch off, a total of 2.4 Tonnes of relief material was loaded in the aircraft. The crew located the flooded villages in Chapakhowa area and carried out drops of relief material at soft grounds easily accessible by the villagers. In the process of drop, while flying over ‘Panch mile’ village, many people were found stranded on a road and were indicating for help. The crew carried out an orbit of the area to check the feasibility of landing since winching would have wasted a lot of time and the number of people was in excess of 50 and also the area around the road was heavily flooded.

After taking all the safety aspects into considerations, picked up the stranded people. A second shuttle was also carried out to rescue the leftover people. There after they were taken to the helipad at Chapakhowa

A total of 2.4 Tonnes load comprising of relief material was dropped and  60 people including 10 children were rescued.