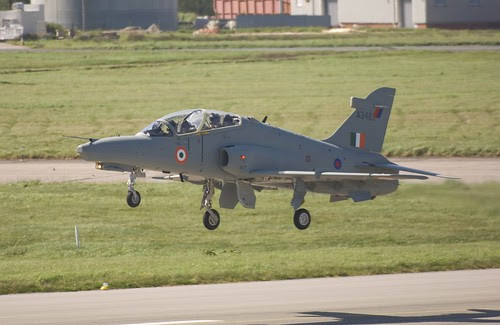 Hawk-Mk132-could-soon-be-meeting-the-requirements-of-the-IAF-prestigious-aerobatic-team, a photo by Chindits on Flickr.
BAE Systems has received a Request for Proposal (RFP) from Hindustan Aeronautics Limited (HAL) for a potential order to supply products and services for the manufacture of 20 Hawk Advanced Jet Trainer (AJT) aircraft. The aircraft, to be built by HAL in Bengaluru, will fulfill the Indian Air Force’s requirement for its prestigious aerobatic team.

Upon successful conclusion, this would be the third contract placed on BAE Systems for supply of materials and equipment for the Hawk Mk132, building upon previous orders of 66 aircraft in 2004, comprising supply of 24 Hawk aircrafts in fly-away condition and 42 aircraft built under license by HAL, and a further 57 aircraft in 2010. Under these contracts, BAE Systems has worked closely with the Indian MOD and HAL to establish a production line in India where the aircraft are now assembled. Hawk trainers already in service with the Indian Air Force are performing well.

Guy Griffiths, Group MD, International, said, “This is a tremendous opportunity to build on the success of Hawk in India and demonstrates the progress we are making in capturing significant opportunities to address the defence modernization requirements of the Indian Government. Together with HAL, we look forward to giving the Indian Air Force’s display team a fantastic aircraft.” Together, BAE Systems and HAL are committed to strengthen their relationship through ongoing discussions on exploring long-term sustainable business opportunities, globally.

The potential addition to the Indian fleet, one of the largest fleets of Hawk anywhere in the world, would take the number of Hawk aircraft ordered worldwide to over 1,000. The Hawk aircraft has been widely exported. Customers include Australia, Canada, South Africa, Bahrain, India, the Royal Saudi Air Force and the UK Royal Air Force. The UK Royal Air Force aerobatics team Red Arrows has used the BAE Systems Hawk since 1979.
BAE