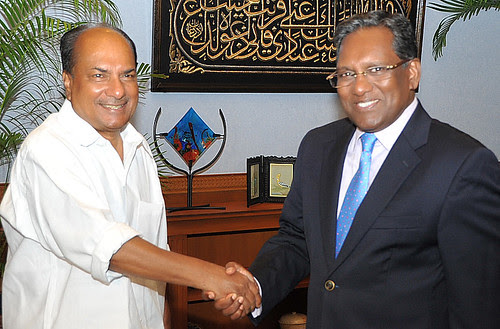 President Waheed appreciated  the visit of Mr Antony to the island nation and said that it had ‘increased the confidence level in the relations of the two countries’. He also appreciated India’s support in facilitating a way forward in the political process in Maldives.

Mr Antony briefed the President on the discussions he had with his Maldivian counterpart Mohamed Nazim yesterday and the decisions taken to further cement the defence relationship. The President expressed happiness over the developments and assured full cooperation of Maldivian side in implementing the decisions. He said the security of the Indian Ocean Region is of vital importance to both the countries and the two countries should strive to enhance cooperation in myriad ways to thwart any threats. President Waheed noted that there are no inhibitions on either side as each treated the other side as a close and trusted friend.
The meeting ended with the two Defence Ministers exchanging the agreement, in the presence of the President, to station the Indian Coast Guard Advanced Light Helicopter in Maldives for a further period of two years.

Last evening, Mr Antony, accompanied by his Maldivian counterpart Mohamed Nazim, flew down to the picturesque Maafilaafushi island in a sea plane and laid there the foundation stone of the Composite Maritime Training Academy of Maldives. The Academy, to be built in three phases, with assistance from India, will train personnel from  Maldives Coast Guard and Marine Police.
DPR