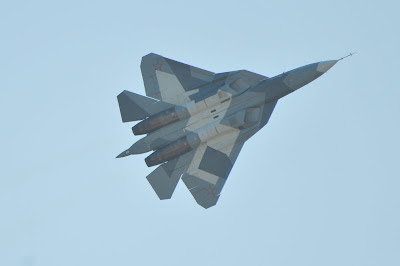 "Sukhoi" has started testing the fighter T-50 (PAK FA) with a new on-board radar system with an active phased array, said in a statement received by the Editor "Lenty.ru." The new radar is installed on the third prototype of the future fighter T-50-3. In the first ground and flight tests were checked in the modes of the radar features "air-to-air" and "air-surface". In parallel testing of optical channels.

Radar PAK FA being developed by the Research Institute of Instrument name Tikhomirov. According to the "Sukhoi", a radar with electronic beam control is made on the basis of the Russian element nanoheterostructures. The system will allow the PAK FA to recognize and classify the group and single target at long range, and at the same time pointing to arms for a few of them. In addition, on-board system will provide communications and electronic countermeasures.

In February 2012 it was reported that the PAK FA prototype made a total of more than 120 flights. The third prototype of the aircraft involved in the flight test program in November 2011. It is expected that during 2012 the program will connect, and the fourth prototype of the T-50-4. The first prototype aircraft flies from January 2010 and the second - in March 2011.

Under the current schedule, during the current year is planned to complete testing of the aircraft airframe perspective, and in 2013 to pass a few T-50 troop trials. Serial supplies PAK-FA to the troops is scheduled to begin in 2015. Currently, the Russian Defense Ministry plans to purchase 60 new fighter jets, but in the long term, according to unconfirmed reports, the volume of purchases may be increased up to 120-150 units of the PAK FA.