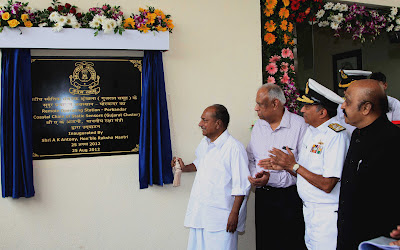 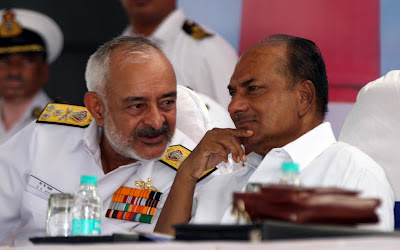 Marking a major step forward in coastal security mechanism in the country, the Defence Minister Shri AK Antony dedicated to the nation the Static Sensors Project of Coastal Surveillance Network (CSN) of the Indian Coast Guard at Mumbai and Porbandar today. The network will augment the shore-based electronic surveillance capacity of the Coast Guard along the highly sensitive and high traffic density coast line in Maharashtra and Gujarat.
“As the western coast line is a highly sensitive one, we decided to operationalise this chain in Maharshtra and Gujarat ahead of the completion schedule of the Project. Our objective is to have this mechanism available for immediate utilization”, Shri Antony said in Mumbai. He said the Project will act as a ‘force multiplier’ and augment the coastal security apparatus. “With its help, the maritime forces will surely be able to devise an objective-based, rapid and effective response mechanism against perceived threats.  The maritime forces will utilise their surface and air assets in such a way that they can derive maximum benefit from this surveillance network”, he said.
Considering the strategic nature of the Project and with an aim to develop indigenous capabilities in the field, the Government has decided to implement it through Bharat Electronics Limited (BEL). The contract for this turnkey project was concluded with BEL in September 2011 for an amount of about Rs 602 crores.
Under Phase I of Coastal Surveillance Network, Coastal Static Sensors will be put up at 46 locations.  Out of these, the mainland radars are expected to be operationalised later this year, while those on the island territories will become operational next year.
Despite this network, Shri Antony conceded that some gaps will still exist. Towards this end, the Coast Guard has carried out a ‘gap analysis’ based on which a second phase of the Project will be implemented and 38 more locations will be added so that there are no gaps in the entire network.
Shri Antony said the patching up of National Automatic Identification System Network (AIS) and Vessel Traffic System (VTS) of Gulf of Khambat, along with the Coastal Security Network, will help us in identifying a friend or foe in our waters.  ‘We are also intensifying efforts to achieve complete Maritime Domain Awareness (MDA) so that all our security agencies, State governments and Central Government have real-time pictures and data of our waters’, he said.
Shri Antony struck a note of caution, however. He said, with the Coastal Surveillance Network Project coming up along the coast, any interpretation that the coastline will be completely secure would be a misnomer, till such time complete physical verification takes place. The various Central and state agencies involved in facilitating the security of the coastal areas have to synergise their efforts and share information on a real time basis.
“The fast-changing coastal security scenario and the varied threat perceptions require proper coordination and alertness among all the stakeholders’, he said.
Referring to the role of fishermen community in coastal security, Shri Antony said it is of singular importance and ‘we must ensure maximum community participation to further strengthen our coastal security’.  He urged all the maritime stakeholders and law enforcement agencies to maintain constant vigil and never let their guard down.
Recounting the various measures taken by the government post-26/11 Mumbai Terrorist Attack, Shri Antony said we have increased the capacity of the security forces in terms of surveillance, patrolling at sea, intelligence gathering and manpower. However, a robust coastal security mechanism requires various arms of the government to work in perfect tandem. He said, we also need to take initiatives to enact adequate legislations, in accordance with international conventions, to give our security forces enough legal back up.
The Secretary Defence Production Shri Shekhar Aggarwal, the DG Coast Guard Vice Admiral MP Muralidharan and the CMD of BEL Shri Anil Kumar were present at both the events.