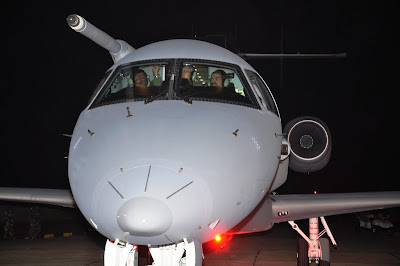 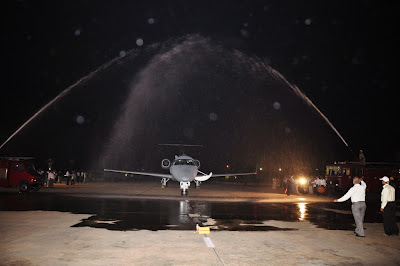 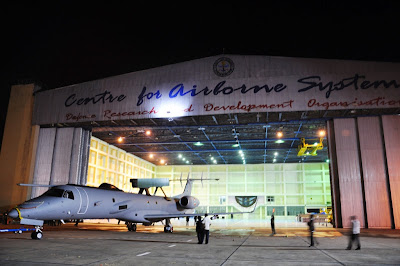 First fully modified aircraft for indigenous Airborne Early Warning and Control Systems landed on Indian soil at CABS (Centre for Airborne Systems, Bangalore, a DRDO laboratory) at 22:10 hours at HAL airport.   Aircraft was received by enthusiastic crowd from CABS, its work centers, CEMILAC and IAF members. The aircraft and the flight crew was received by Dr Christopher Program Director and Dr K Tamil Mani, Chief Executive, CEMILAC.  The aircraft and its crew from Indian Air Force and M/s Embraer was given a hearty welcome with water cannon.

The acceptance of the Aircraft was completed over a period of 15 days at Embraer Facilities in Brazil,  by a team from CABS,  its work centres, CEMILAC, DGAQA & IAF.

The arrival of this Aircraft marks the beginning of another phase of journey leading to the next major milestone of integration of the DRDO developed mission system, which will be followed by development flight trials in India beginning of 2013.

It may be noted that this is the first Aircraft delivered by M/s Embraer for which the contract was signed in 2008. The next Aircraft is expected to arrive in December 2012.
DRDO/DPR