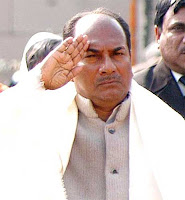 The Defence Minister Shri AK Antony reviewed the progress on various steps taken to enhance the coastal security in the country here today.  Shri Antony directed that the first phase of the Coastal Radar Network, on both the west and east coast should be completed in the next two months and that he would himself visit some locations very soon. The Coastal Radar Network is an important component of the coastal security mechanism which will ensure monitoring and identification of maritime traffic.

The Minister emphasized that all the stakeholders should work with unified purpose and ensure that there are no gaps in the Coastal Security framework.  He further directed that time bound actions should be taken for ensuring a full proof coastal security system.  He said the government is fully committed to modernize Navy and Coast Guard as well as assist State Governments to undertake any challenges to our coastal security. He also urged the state governments to be equal partners in this important National Security Issue.  It is pertinent to point out that the capacities of the Navy and Coast Guard are being increased progressively to meet the growing security requirements.

Shri Antony desired to have another meeting on Coastal Security immediately after the ensuing Parliament Session with representatives of other Central government ministries and agencies who are part of the Coastal Security mechanism.  There is already a high level Committee viz. National Committee on Strengthening of Maritime and Coastal Security against threats from the sea, under the Chairmanship of Cabinet Secretary and which has Chief Secretaries of coastal states as members along with others to ensure a better coordination in the area of coastal security.

The delivery time schedules of supply of Fast Interceptor Crafts, implementation of National Command Control Communication and Intelligence Network and Vessels and Air Traffic Management System on the east coast was also reviewed in the meeting.