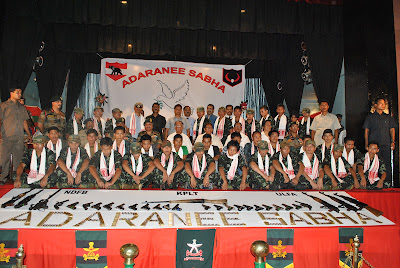 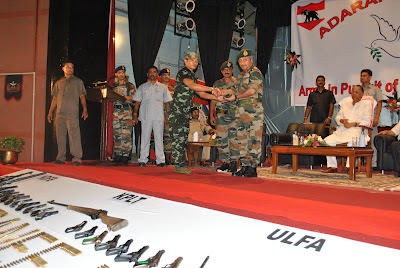 The resolute counter terrorist operations carried out by Gajraj Corps with the support of Assam Police, Eastern Command Intelligence Unit and civil administration has resulted in motivating a number of terrorists of different groups to give up arms and join the mainstream. An ‘Adarnee Sabha’ was organized by the Gajraj Corps at District Library, Tezpur, Sonitpur,today, where 06 cadres of National Democratic Front of Bodoland (NDFB) Anti Talk faction, 02 cadres of United liberation Front of Assam (ULFA) Anti Talk faction and 27 cadres of Karbi Peoples Liberation Tigers (KPLT) including Jiten Bey, Self Styled (SS) Deputy Commander-in-Chief (erstwhile); Davinson Rongpi, SS Deputy Commander-in-Chief (current); Dilip Rongphar, SS General Secretary; Maniram Rongpi, SS Foreign Secretary and Francess Milik, SS Joint Secretary (Publicity), surrendered with their arms and ammunition. The arms and ammunition, handed over by the surrendered cadres, which included 05 rifles and 19 pistols and other war like stores, were also displayed during the ceremony.

Honorable Chief Minister of Assam, Shri Tarun Gogoi presided over the homecoming ceremony of these youths into the mainstream.  He welcomed the surrender of these youth, saying it would go a long way in solving the problem in Assam. He further complimented them on shunning the path of violence and exhorted that these small steps taken by them will help in building a peaceful and prosperous Assam.  The ceremony was attended by Lt Gen Shakti Gurung, General Officer Commanding, Gajraj Corps and many other senior officers of the Army and civil administration.

The Adarnee Sabha organized by the Gajraj Corps was the culmination of their uncertain journey of life riddled with violence and uncertainty.  A comprehensive rehabilitation package has been offered by the State Govt to settle them in their new life.  It was requested by the Army authorities from concerned departments of State Administration for providing them vocational training and other assistance for their re-settlement. The demeanour of surrendered rebels indicated that they were happy with the turn of events and were hopeful for a secure and promising future.
DPR-Tezpur