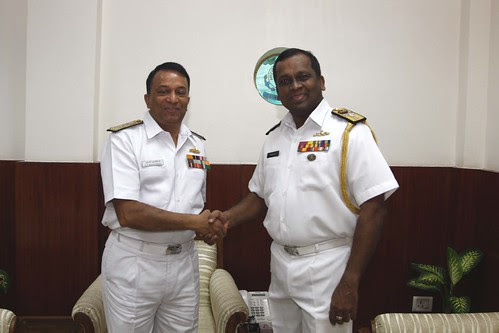 INDIA-SRILANKA COAST GUARD HIGH LEVEL MEETING, a photo by Chindits on Flickr.
A high level delegation led by Rear Admiral AARA Dias, the Director General Sri Lanka Coast Guard (SLCG), who is on a visit to India from 26-30 Aug 2012, held a High Level Meeting, with the Indian delegation led by Vice Admiral MP Muralidharan, Director General Indian Coast Guard here today. The visit is in continuation of the various efforts by the governments of the two countries towards cooperation between the ICG and SLCG and pursuance of the discussions on maritime issues of mutual concerns to formulate a cooperative approach.

The establishment of SLCG on 04 Mar 2010 has been a way forward in meeting the challenges in the new global safety and security regime in this region. The recent visit is very significant in providing a fresh impetus to the existing ties between the two organisations as the meeting is being held in the back drop of the evolving maritime security situation in the region. The focus of the meeting was on further strengthening the operational level interaction between the two Coast Guards.

During the visit, the delegation also interacted with Mr Shankar Aggarwal, Additional Secretary, Ministry of Defence and deliberated on common maritime interests. The delegation would visit Coast Guard’s Western Region at Mumbai, which will offer an insight into various capabilities and activities of Coast Guard at field level including in Search and Rescue and Pollution Control.

During the High Level discussions, it was mutually agreed to strengthen the cooperation on evolving collaborative approach, in addressing a spectrum of maritime issues concerning safety and security.