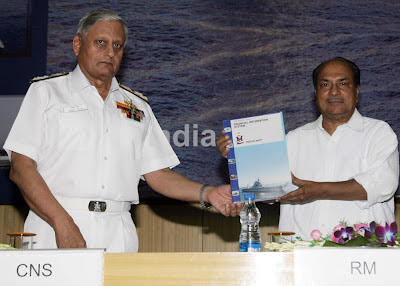 Lauding the Navy’s initiative as a major initiative in the field of financial management Mr Antony said “I hope other two services and all the other departments of the Government of India will follow this timely and useful initiative of the Indian navy.  I would like to congratulate the navy for taking this timely initiative”.

Speaking about the need for judicious utilization of the nations fiscal resources, Mr Antony said  “Now our defence budget is touching nearly 2 lakhs crores, in actual terms 1,93,000 Crores, and in the years to come this will further step up every year, substantial step up is there.  But even then considering the security scenario around us we will not be able to find resources as per the aspirations of the armed forces fully”. Emphasizing the importance of laying out proper priorities he said that “We have prepared the annual plan, five year plan and the LTIPP upto 2027”. Urging other Armed Forces to take a cue from the Indian Navy’s initiative Mr Antony said “if the other services follow, will help you also, for a proper planning how to utilise our rare resources”. Ever conscious of the need for fiscal prudence Mr Antony stressed this aspect saying “Every rupee that we get from the Indian Tax payer we must utilise it properly effectively and as per the priority. That is why I feel it is a very timely initiative by Indian Navy. It will help entire nation even at least entire government if we can follow this initiative with all the departments of the Government of India”.

The FIS, a comprehensive financial information system, will facilitate effective planning, allotment, expenditure and monitoring of the Naval Budget. The system links the New Delhi based Naval Headquarters with the three Command Headquarters and various ships and establishments located far and wide across the country.

The onerous task of Budget Management involved monitoring allotment and expenditure across about five hundred Code heads being spent by six hundred and fifty units across the Navy. The implementation of FIS marks a transition from the predominantly manual system of budget management and will reduce the delays and efforts involved in data collation and reporting, inherent in any manual system. By consolidating the transactions of disparate organizations across the various code heads on a single unified platform FIS will enable timely decision making to ensure optimal utilisation of budget.

Saying that the FIS “is another step in the series of measures to bring about more probity, accountability and transparency in our public dealings and financial transactions”, Mr Antony stressed upon the need to “Overcome existing constraints and enhance integration of CDAs to ensure maximum utilisation of the FIS”.
The Financial Information System (Navy) is built on SAP Enterprise Resource Planning tools and has been custom configured and developed by M/s Wipro for the Indian Navy.