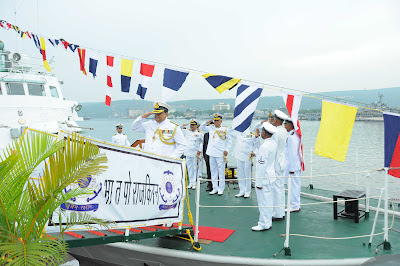 The 50 meter indigenous IPV displaces 300 tonnes and can achieve a maximum speed of 34 knots, with an endurance of 1500 nautical miles at economical speed of 16 knots. Equipped with state-of-the-art weaponry and advanced communication and navigational equipment, it makes an ideal platform for undertaking multifarious close-coast missions such as surveillance, interdiction, Search and Rescue, and medical evacuation.   The special features of the ship include an Integrated Bridge Management System (IBMS), Integrated Machinery Control System (IMCS) and an integrated gun mount with indigenous Fire Control system (FCS).

ICGS "Rajkiran", literally meaning "Royal Light", will be based at Haldia and will be under Administrative and Operational control of the Commander, Coast Guard Region(North-East).

In his address during the commissioning ceremony, Vice Admiral Anil Chopra assured that the Indian Navy and the Indian Coast Guard are working in tandem to achieve the overall objective of Maritime and Coastal Security of our country. He also stated that that there are numerous stakeholders involved in Coastal Security and building synergy amongst all of them is extremely important to achieve the common goal of national security.

The ship is commanded by Lieutenant Cdr Sumanta Roy, who is a specialist in Anti Submarine Warfare, in the presence of Inspector General SP Sharma, Commander, Coast Guard Region (East) and other senior dignitaries of the Central and State Govt. The ship has a crew of 05 Officers and 30 Enrolled Personnel.
DPR