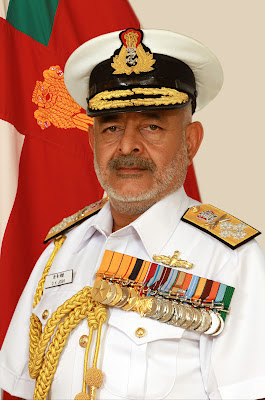 Admiral Devendra Kumar Joshi took over from Admiral Nirmal Verma on August 31, as the 21st Chief of Naval Staff of Independent India and the 19th Indian to take command of the Indian Navy.

In the morning, Admiral Joshi paid tribute to the country’s martyrs by laying a wreath at the Amar Jawan Jyoti and inspected an impressive Guard of Honour at the lawns of South Block. Later, in the office of the CNS, Adm Nirmal Verma ceremonially handed over the Chief’s telescope to Admiral DK Joshi.

In his maiden message to the Navy, saying he was “in gratitude for having been given the honour and privileged opportunity to Command the Navy”, Admiral Joshi indicated his priorities as the new Naval Chief. He stated “for the Navy to fulfil its mandate as a maritime power for national prosperity, 24 x 7 attention would need to be paid at all levels to ensure that there are no gaps in our security preparedness”. He emphasised that “to achieve security related objectives, the man-machine interface is crucial and the Navy would need to professionally re-audit, train and consolidate its preparedness to optimize the existing capabilities as well as harness the full potential of the transformational new capabilities being inducted”.

After his elevation to Flag rank, the Admiral served in the Integrated Headquarters in all nodal Branches. In the Personnel Branch as the Assistant Chief of Personnel (Human Resource Development), in Warship Production and Acquisition as the Assistant Controller of the Aircraft Carrier Programme (ACCP), and thereafter in the Operations Branch both as Assistant Chief of Naval Staff (Information Warfare and Operations) and as the Deputy Chief of Naval Staff.
Before taking over as the FOC-in-C Western Naval Command, he contributed towards inter-service integration, first as the Commander-in-Chief of the Andaman and Nicobar Command,the only tri-service integrated Command. He was awarded the Param Vishist Seva Medal (PVSM) during this time. Later, he served as the Chief of Integrated Defence Staff to Chairman, Chiefs of Staff Committee (CISC).
Admiral Joshi is a distinguished graduate of the Naval War College, USA, an alumnus of the College of Naval Warfare, Mumbai and the prestigious National Defence College, New Delhi. He was also the Defence Advisor in the Indian High Commission at Singapore from 1996 to 1999.
He is married to Mrs Chitra Joshi and the couple have two daughters.