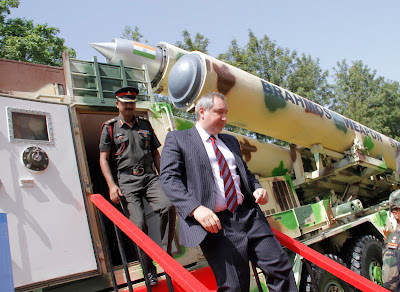 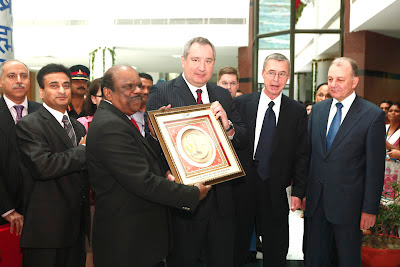 BrahMos is not only a successful Joint Venture but also a model for cooperation which has immense political value for our two countries – Mr. Dmitry Rogozin.

He was shown the BrahMos Mobile Autonomous Launcher with explanation of the full weapon complex by Dr. A.Sivathanu Pillai, CEO & MD BrahMos. During the visit the minister was briefed on the achievements and progress the JV has made in the recent years including a futuristic  vision plan -2050 for developing newer technologies  to remain  a market leader in its field.

Mr. Rogozin on completion of his visit remarked “I am delighted to see the enthusiasm of Indian and Russian specialists who have made the project BrahMos a success. I believe in its bright future as I believe in the future of friendship between our two nations.

Earlier addressing young scientists of BrahMos Aerospace  he said “Latest technologies can be shared with close friends only , which has been seen in our cooperation in BrahMos, both  India and Russia are great countries and working together we can do wonders. I wish you all the best and success in the development of futuristic technologies for both our nations.

During the visit Dr. Pillai highlighted the importance of the Joint Venture product getting into the Naval fleet of Russia and undertaking of faster developments of new products including hypersonic BrahMos to maintain technological edge over other countries and maintain its First in the World status.