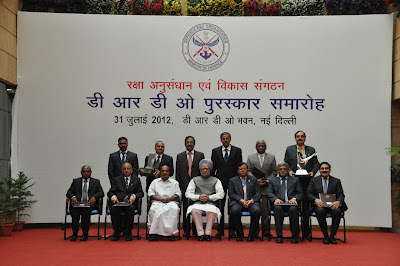 
"Honourable Pradhan Mantriji, Honourable Raksha Mantriji, National Security Adviser, Chiefs of the Armed Forces, Secretaries in the Ministry of Defence / Govt of India, distinguished invitees, Awardees & their families, members of the media my colleagues, ladies and gentlemen. It gives me great pleasure to welcome you all to the Annual Awards Function 2012. A special word of welcome goes out to Hon Prime Minister and our Raksha Mantriji who have by their presence today demonstrated their solidarity with DRDO.

2.This annual event held to celebrate the accomplishments of our dedicated work force is an occasion when we pay collective tribute to the work output of DRDO Scientists. Indeed the year 2011-12 was marked with major accomplishments in almost every technology domain, as DRDO worked to catapult itself as a technology leader in defence systems.


3.As always, our prowess in strategic systems led the way with a number of milestones achieved- including the spectacular maiden launch of India’s long range strategic missile Agni 5, successful launch of Agni IV and Prahar and  launch of the Endo-atmospheric interceptor missiles.

4.In the arena of tactical systems- major milestones included maiden flight of LCA Navy and the AEW&C platform with a number of DRDO developed systems and successful tests of long endurance UAV Rustom1 which will pave the way for development of Rustom II in full deliverable configuration. Two regiments of Arjun MkI  entered the proud possession of our Army; Arjun MK-II developed in record time of 2 years is now under trials. The induction of large number of PINAKA rocket launchers in the operational command of the Indian Army is a much needed boost to DRDO as it strives to establish its credentials with the Indian Army’s operational units.

5.DRDO’s efforts in development of Naval systems received a major boost with the successful trials of the Autonomous Underwater Vehicle, operationalization of a number of SONARs on respective platforms and extensive sea trials of heavy weight torpedo VARUNASTRA. The completion of DIVYA DRISHTHI signal intelligence program and trials of a number of Radars have given a major boost to self reliance in this critical area. The productionisation of DMR steel leading to production of about 30,000 tons; and Titanium from the newly established  KMML were other achievements. Bulk production orders were received for Submarine Escape Suite for Navy and Lightweight Helicopter Oxygen System for IAF.

6.      In the field of Cyber Security, notable achievement was the setting up of Cyber Defence & Forensic labs and the launch & preliminary design activities in the development of network hardware and software systems. DRDO has also initiated substantial development activity in the field of Space security viz. in Space based ELINT/COMINT, Satellite based communication & Navigation programs etc

7.      These were just a glimpse of achievements of DRDO in the past year which spans the entire gamut - from the Nation’s strategic deterrence capability to technology spin-offs for India’s civil sector. The production value of systems based on technologies developed by DRDO during the past one decade is well over 1, 48, 000 crores. I would like to take this opportunity to announce that the percentage of indigenous systems through the Acquisition route has significantly increased from the earlier 30% to almost 60% as of 2012(without accounting for strategic systems), thanks mainly to DRDO developed weapons & platforms.

8. Our major goals for the year ahead include:

·        First flight of  AEW&C system in India with all systems integrated,

9. In the 12th Five year Plan, we will launch a number of major programs which will mark a paradigm change in force preparedness including:

·        Pravira- for protection of Critical Infrastructure


In the year 2011 about 125 projects at a total outlay of about Rs 100 Crores was sanctioned to about 70 research/academic institutions. Based on our innovation patent portfolio DRDO has won the prestigious Thomson Reuters Innovation Award. The DRDO Innovation Centre at the IITMadras Research Park which was initiated last year is now ready for formal launch with specific areas and  teams identified to pursue Basic & applied research in close association with Academia, Industry and research scholars.


11 Under the Technology Transfer program, about 40 MoUs  have been signed and business development for another 20 technologies is in the advanced stage of Commercialisation. A significant initiative under the DRDO-FICCI collaboration was our contribution to the Aahar program using DRDO developed food products, thus providing employment to women for the benefit of the lowest economic strata of society. The acceptance of DRDO developed bio-digesters for the Railways, in turn has resulted in the Min. of Environment requesting DRDO assistance and the first set of bio digesters was installed in the Dhamra coast, with plans to extend the installation to 2.4 lakh Gram Panchayats in phases.


12.DRDO-Industry interaction received fresh impetus in 2011, with participation in major defence exhibitions including the Indo-Africa Business Partnership Summit at Hyderabad, the Aerospace and Defence exhibition(AAD) at S. Africa, Defence Expo at Rio-de-Janiero Brazil, MSPO at Poland and DSEi at London, wherein interest was evinced for joint collaboration with DRDO. At the Def Expo 2012 held in March-April at Delhi, we have proudly showcased our products & systems in competition with the best in the world.


13.Appreciating the benefits of International Cooperation DRDO in the past year has interacted with a number of countries including UK, Canada, Germany etc which have yielded fruitful results- one of which was the establishment of a Kyrygyz-Indian mountain Biomedical research Centre.

14.In a departure from our traditional role of prototype development, DRDO has over the recent production cycle of our major programs, realised that a substantial amount of hand holding is required in the post development phase. There are problems related to capacity & capability build up viz. Requirement of Exclusive assembly line for DRDO systems, augmentation & modernisation of existing production infrastructure, induction of trained skilled manpower in DPSUs & OFB – all of which are critical to enable DRDO systems to be produced in required numbers, with requisite quality- and we look to the Govt for efforts in this direction.

15.    Yet another issue which I would like to highlight is the need to augment the capability of India’s manufacturing sector: This is an area of concern- as use of modern manufacturing techniques can provide a big boost to both defence products and the Indian economy in the long run. DRDO proposes:

a.    Specific manufacturing facilities (for e.g CMTI/HMT) to be dedicated to futuristic technology development projects .

b.   Creation of National centres for aeroengine structures and Naval structures which are currently a big lacuna in the country and is hampering indigenous capability.

c.   Investments in establishment of Silicon and MEMS foundry, GaN foundry and photonics-required for technology dominance.

For each of the above, substantial funding will be a prime requirement.

16.Yet another area of concern is the need for Policy decisions on more JVs with DRDO: As you are aware Brahmos was an outstanding example of Indo Russian joint venture which saw quick success . Guidelines have been recently issued for JVs for DPSUs. We feel the need for such mechanisms to be evolved for DRDO JVs too- so that an efficient workable system can be put in place to enable quick returns in technology areas with complementary work share.

17.The paper on establishment of Empowered Defence Technology Commission has been moved by DRDO and is under protracted discussion at various levels of Govt. We hope that it will be approved soon and the Commission on lines of Space & Atomic Energy Commission will be setup with suitable empowerment so as to enforce Self Reliance - which is of critical importance for India to become a world leader in Defence Systems.

18. The final issue which I would like to highlight is the DRDO Budget which has remained more or less same. In tune with Hon’ble Prime Minister’s announcement at the 99th Indian Science congress held in January this year and in view of major programs which are on the anvil viz. SRSAM, LCA MKII, ATVP etc we look forward to getting higher allocation of funds at the review stage- which is essential to bring in next generation technology maturity.

19.As is evident, we have set for ourselves an ambitious roadmap, armed with the desire to dream big and propel our nation to an elevated position on the world stage. For this to become a reality we look forward to the collective efforts, co-operation and support from all stake holders.

20. would like to conclude with a word of thanks to the Honourable Prime Minister for having accepted our invitation to Address the DRDO community and honour the awardees. We also thank the Hon. RM, RRM and other dignitaries for their presence & continued support to our endevours. DRDO is committed to fulfilling its mandate of providing cutting edge defence technologies of world class standards to serve the operational requirements of the Indian Armed Forces and achieve higher level of self reliance in defence technologies.