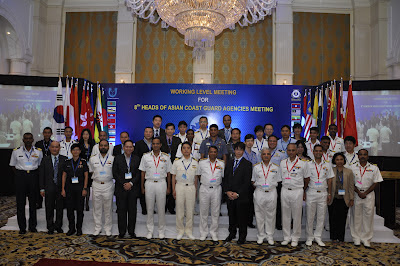 The first ever Heads of Asian Coast Guard Agencies Meeting (HACGAM) in South Asia is scheduled to be conducted in October 2012 in New Delhi.  HACGAM is an apex level forum facilitating congregation of all the major Coast Guard Agencies of Asian region.  This initiative was developed initially in 2004 to discuss cooperation among the member organizations to combat piracy in the region.  However, the scope of discussions has been expanded to include law enforcement, maritime security, disaster prevention and relief and capacity building.  Presently, there are more than 20 member organizations from 17 countries that are part of the initiative.

The 8th HACGAM is the first meeting being held in South Asian region and is being co-hosted by Indian Coast Guard and Japan Coast Guard under the auspices of Nippon Foundation, Japan.  The Working Level Meeting (WLM) is being conducted from 18 to 19 Jul 2012 to discuss the agenda and prepare the documents for the 8th HACGAM scheduled to be conducted from 01 to 04 Oct 12 at New Delhi.  The Nippon Foundation had also hosted “Conference on Combating Piracy and Armed Robbery against Ships” and HACGAM until 2008.  Since 2009, the Foundation has been  co-sponsoring HACGAM.
ICG