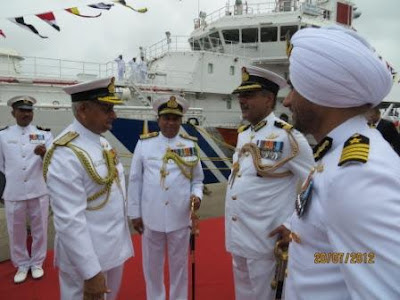 The 95 m long indigenous PCV displaces 4300 tonnes and can achieve a maximum speed of 20.5 knots, with an endurance of 6500 nautical miles. The ship’s primary role is pollution response at sea and is equipped with the most advanced and sophisticated pollution response and control equipment for mitigating oil spills, which include containment equipment like hi-sprint booms and river booms, recovery devices like skimmers and side sweeping arms. The ship is capable of unhindered oil recovery operations with storage tank capacity of 500 KL in addition to inflatable barges.

The ship is installed with modern Integrated Platform Management System and Power Management System, which makes it unique for unmanned machinery operations. It is also fitted with Dynamic Positioning System for fire fighting and pollution response operations and an infra-red surveillance system for night surveillance. The PCV is armed with a 30 mm CRN 91 Gun with fire control system and capable of operating one twin engine ALH/ Chetak helicopter. In addition to its designed role, the ship can be deployed for multifarious tasks such as surveillance, interdiction, Search & Rescue and medical evacuation.

In his address during the commissioning ceremony, Chief of the Naval Staff stated that the PCV would go a long way in addressing the critical requirement of capacity building in the area of pollution response. He further stated that several far-reaching initiatives towards augmentation of manpower and force levels were underway that would provide the requisite fillip to the Coast Guard’s capabilities.

The ship is commanded by Deputy Inspector General Iqbal Singh Chauhan and has a complement by 11 Officers and 100 Enrolled Personnel. Post commissioning, ICGS Samudra Paheredar will be based at Visakhapatnam under the administrative and operational control of the Commander, Coast Guard Region (East).
DPR