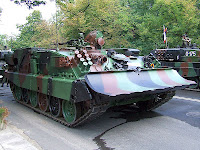 The new ARRV, a variant of the Arjun Main Battle Tank, is being developed for the Indian Army at the DRDO lab here. CVRDE will develop two prototypes in the next three years. The hull, including the chassis automative system, will almost be the same as Arjun Mark II and slight modifications will be made to accommodate a crane and a winch since it will be a recovery vehicle.

The Army is expected to order 30 units if the Chennai-based DRDO lab satisfies its specifications in the first two units. The new ARRV will weigh around 65 tons and function as a recovery vehicle for the Army in tough terrain as well as in extreme climatic conditions.
PTI

This can't be based on the Arjun!!!
The Arjun has 7 wheels in its track system, while the said vehicle has only SIX.