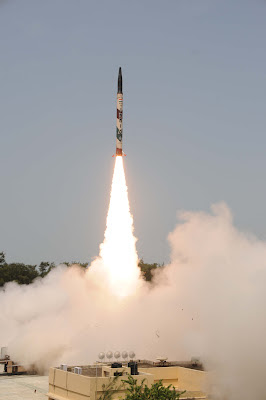 India’s 700 km range ballistic missile, ‘AGNI I’ was successfully launched today from the wheeler island off the coast of Odisha. It was a textbook launch meeting all mission objectives and the missile reached the target point in the Bay of Bengal following the prescribed trajectory.  The missile was launched from Road Mobile Launcher System and was tracked by Radar and Telemetry stations located along the coastline. Two Naval Ships located near the target point tracked the missile in the terminal phase of the Flight.

Indigenously developed by DRDO the missile is already in the arsenal of Indian Armed Forces and was launched by the Strategic Forces Command as part of training exercise to ensure preparedness.

Dr Saraswat congratulated all the Scientists and employees of DRDO and the Armed forces for the successful launch.

Defence Minister Shri A K Antony has congratulated the DRDO team on the successful launch of Agni I.