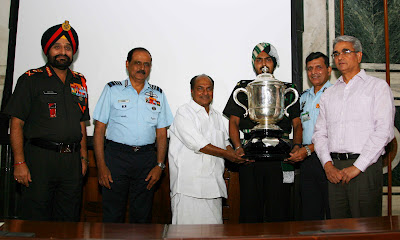 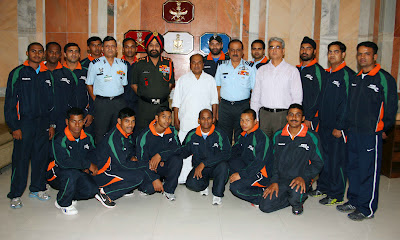 In a brief ceremony here today, the Defence Minister Shri AK Antony felicitated the Armed Forces sportspersons who won medals during the Commonwealth Games 2010. He also felicitated the Services Football team that recently won the Santosh Trophy-2012 after a gap of over 50 years.

The ceremony was attended by senior officers from the Armed Forces and the Ministry of Defence. The Defence Minister lauded the contribution of Armed Forces athletes by contributing an impressive tally of 10 Gold, 07 Silver and 08 Bronze medals which is more than 25% of the total medals won by the country that included 38 Gold, 27 Silver and 34 Bronze medals. 60 Armed Forces athletes had participated in 10 events of the total 17 events of the Commonwealth Games which amounted to 30% of the Men’s contingent strength in these events.

Shri Antony also expressed his appreciation of the Services Football team that has won the Santosh Trophy with LAC VV Farhad of the Air Force being declared the Man of the Tournament. While addressing the winners, he felt that this cash award was not just a recognition of their achievements but more importantly it would serve to motivate others.  Shri Antony exhorted the Services personnel to excel in fields other than sports as well and called upon the officers to encourage participation in cultural activities.
Services players have traditionally been in the forefront of evolution of the various sports disciplines in India. Though sportspersons have emerged from other walks of life and backgrounds, Services players have retained a major share in the overall national medal tally. The Services are also proactively undertaking talent scouting and grooming deserving sportsmen using the state-of-art infrastructure.

The Defence Minister presented cash prizes on the occasion individual Gold winners at the Commonwealth Games received Rs.12 lakhs each while the Silver and Bronze Medallists received Rs.7 lakhs and Rs.5 lakhs respectively.  Chief Petty Officer Omkar Singh, who won 2 Gold, 1 team Gold and 1 team Silver in the Shooting events, was awarded the highest cash prize of Rs.38.25 lakhs while another shooter Sub Vijay Kumar bagged Rs.37 lakhs, winning 1 Gold, 2 team Gold and 1 Silver medal.   Besides each of the 20 players of the Services Football team which won the 66th Santosh Trophy National Football Championship-2012 recently, were awarded Rs.1 lakh each.