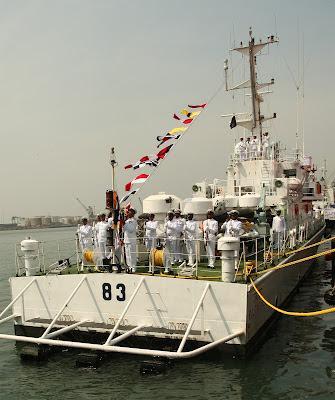 Indian Coast Guard ship RAJTARANG the second of the series of eight inshore patrol vessel (IPVs), designed and built by M/s Garden Reach Shipbuilders and engineers Ltd. (GRSE), Kolkata was commissioned at Chennai by Dr MM Pallam Raju, Raksha Rajya Mantri on 19 May 2012 in the presence of Vice Admiral MP Muralidharan,  Director General, Indian Coast Guard and other senior dignitaries of the central and State Govt.

The 50 meter inshore patrol vessel is equipped with advanced and sophisticated navigational and communication sensors and equipment, at this economical speed of 16 Knots, it has as endurance of 1500 nautical miles.  The special features of the ship include an integrated bridge system (IBS), integrated machinery control system (IMCS) and an indigenously built gun mount with fire control system.  The ship is designed to carry one rigid inflatable boat and tow Geminis for search and rescue, law enforcement and maritime patrol.

ICGS ‘RAJ TARANG’ literally meaning `Royal Musical Note’ will be based at Chennai and will be under administrative and operational control of the commander, Coast Guard Region (East).

The ship will enhance the Indian Coast Guards capability to undertake operation to further maritime safety and security and coastal security on the eastern seaboard.

With the commissioning of ICGS RAJTARANG, the force level of ICG has gone upto to 71 ships and boats and would reach 150 surface platform by 2018.

The ship is commanded by Commandant JI Jose who is a specialist in logistics management.  The ship has a crew of 05 officers and 30 enrolled personnel.