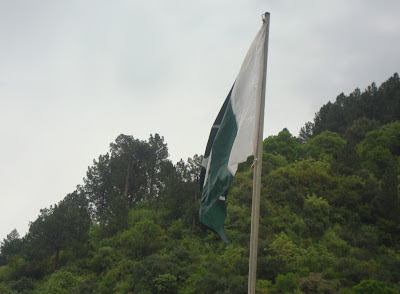 We call it Pakistan Occupied Kashmir (PoK) and they call it Azad Kashmir. One of the four parts of the Indian state of Jammu & Kashmir (J&K), has been under the control of Pakistan since 1947 and obtained constitutional status on October 24, 1947. The capital is Muzaffarabad.

PoK, with an area of 13,297 square kilometers and a population of 3.7 million, has a Prime Minister and a President. The Prime Minister is Chaudhary Majeed and the President is Haji Yakub. PoK has 10 Districts with 14.8% cultivated land and three rivers flow through it, which are Jhelum, Neelum and Poonch.

PoK got a Government in October 1947 and framed rules to run it in 1948. Until 1960 it was the leader of All Jammu & Kashmir Muslim Conference Working Committee nominated as its President, but in 1970 the Presidential system was introduced. It was in 1970 where for the first time the President and the Legislative Assembly were elected directly by the people of PoK. The President is the constitutional head and the Prime Minister is the executive head.The Parliamentary system was introduced in 1974 through Interim Constitution Act. According to the law of PoK non-state subjects cannot buy or own property in the region and state-subjects living in Pakistan enjoy dual citizenship.

PoK has its own Supreme Court, High Court, Sharia Court and subordinate courts. The Supreme Court interprets the constitution of PoK, has three judges including a Chief Justice, while the High Court has five judges and deals with writ and appellate jurisdiction. The Sharia has three judges and can take cognizance into any matter involving the sharia.

PoK claims a 65% literacy rate and has one doctor for 4331 citizens.The region boasts of primary schools having risen from 254 in 1947 to 4195 in  January 2012. There are five Universities, two medical colleges and one cadet college. There are 34 rural health centres and 706 doctors in the state. The people of PoK depend mainly on agriculture, livestock and forestry.

PoK has 27 special institutions and autonomous bodies, which comprise banking and industries among others.

PoK has 5461 kilometers of metalled roads and 5844 kilometers of fair-weather roads, and there are six hydel stations. The region produces 37.6 mega watt of power. The earthquake of 2005 destroyed 314.,474 houses and affected 7000 square kilometer area, resulting in 46,570 deaths.

A total of 50 helicopters were pressed for rescue and relief, which generated 19,000 sorties. A package of Rs. 1,75000 for fully damaged house and Rs. 75,000 for partially damaged house was announced.

Economic and industrial activity is limited owing to the difficult terrain and severe climate. Lack of quality human resource is another big challenge as overseas migration to Europe, US and middle east is common and takes away the skilled pool, Approximately one million population is outside.

The Pakistan Government has decided to fund infrastructure development along the Line of Control (LoC) in PoK, in 13 constituencies. The funding is worth 6.5 billion rupees. The development project will be supervised by the Pakistan Army, and will be completed in five years. Some of these are Chakhoti, Neelum, Mendhar and Hajipir among others.

Chinese construction companies have been doing construction and development work in the region worth six billion rupees. Major projects being handled by Chinese companies are the Mangla Upraising Project, Neelum Jhelum Hydel Project, earthquake rehabilitation, and the 76 kilometer Muzaffarabad road.

There are six points along the LoC which are opened between India and Pakistan, which are, Neelum, Titwal, Mendhar, Hajipir, Tetrinot and Chakhoti. Chakhoti and Tetrinot are the two points which are opened for trade between the two countries.

As far as movement across LoC is concerned, as a result of CBMs, bus service was initiated on April 7, 2005 and in October 2008 the initiative was extended to trade of limited items on barter system between traders of both countries.

Email ThisBlogThis!Share to TwitterShare to FacebookShare to Pinterest
Labels: J and K, Pakistan