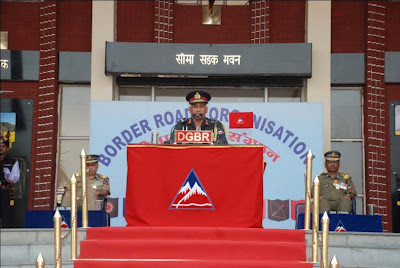 Border Roads Organisation (BRO) celebrated their 52nd Raising Day today with great vigour and enthusiasm. A special Sainik Sammelan was held at the BRO Headquarters here this morning in which Lt Gen S Ravi Shankar, Director General Border Roads addressed all officers and subordinates.
He highlighted the work done by BRO over 52 years, working in extremely challenging conditions along the borders in places like Zojila, Khardungla & Changla in the North and Tawang & Sela in the East.  This  has clearly demonstrated Border Roads as the ‘Best Under Extreme Conditions’.

“The BRO is now working even closer to the Borders and  under more challenging conditions, but the expectations and  the confidence reposed by the people on the BRO is very high and we need to live upto in line with the BRO motto ‘ Shramena Sarvam Sadhyam’”, said Lt. Gen S Ravi Shankar.

“The past year has been very eventful seeing  the start of Projects such as the cable stayed bridge at Basohli and completion of the longest departmentally constructed bridge at Digaru.   The earthquake in Sikkim saw the BRO response at its best attracting national acclaim.  So also was the timely response to keep Srinagar open despite heavy snow.   The passes at Rohtang  and  Zozila have been opened  this year well ahead of schedule with BRO braving winters as never before”, he added.

He also highlighted the steps taken for the welfare of Jawans and streamlining of HR measures at the GREF Centre.
DPR