MoD Wakes Up To Corruption In VVIP Chopper Deal, After I Broke The Story In 2007!

The Defence Minister Shri AK Antony today directed his ministry officials to get a fresh report from the Indian Embassy in Rome following a media report alleging malpractices in the procurement of 12 helicopters for the VVIP Communication Squadrons of the Indian Air Force from Ms. Agusta Westland.

There were media reports also in February 2012 about investigations undertaken by Italian authorities into alleged unethical dealings by M/s Finmeccanica Italy.  Following this, information was sought by MoD from the Indian Embassy in Rome. The Indian Embassy reported that Italian authorities were conducting preliminary investigations on allegations of financial malpractices occurring within Finmeccanica and its subsidiaries in general.  There was no specific probe being conducted on India-related transactions. There is no clear indication at this stage whether the India related deal would be probed on the strength of preliminary investigations.
It may be recalled that the contract for the procurement of the helicopters contains the standard provisions against use of undue influence and employment of agents and payment of agency commission.  A Pre-Contract Integrity Pact has also been signed between Agusta Westland and MoD.
Any such complaint or allegation received will be investigated and the contractual provisions invoked, in case any wrong doing is established, in addition to action that may be required under law. 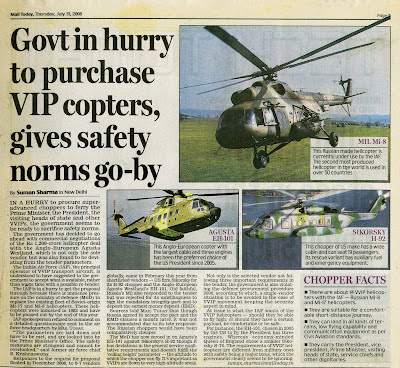 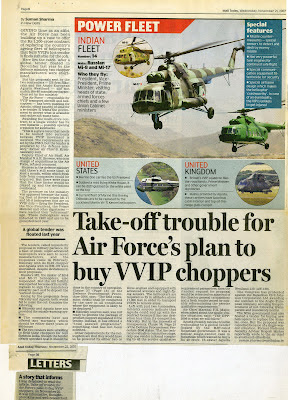