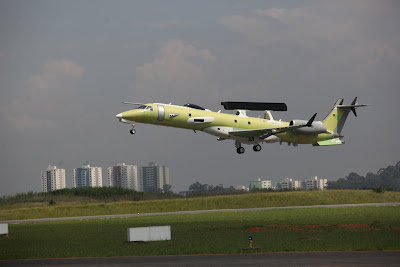 Maiden flight of the second fully modified aircraft for the indigenously developed Indian Airborne Early Warning and Control System (AEW&C) was held at 1930 IST on 4th April 2012 at the San Jose dos Campos in Brazil. The necessary Mission systems & components including the dummy AAAU (Active Antena Array Unit) are successfully fitted onboard Embraer EMB 145I aircraft.

This marks an important milestone in the AEW&C program as this aircraft will be delivered in June 2012 to India. The other mission systems will then be integrated on to the aircraft and Mission System flight trials are likely to commence from Nov 2012.

G Elangovan, Distinguished Scientist and Chief Controller Res & Dev (Avionics), DRDO in his message after the successful flight congratulated the entire team of CABS and associated work centres and the team at Embraer for their effort. Dr S Chrishtopher, Director CABS & Programme Director AEW&C stated, “The AEW&C system has been indigenously developed in a consortium mode with the help of DRDO labs and Indian industrial partners. Apart from the external mission systems developed indigenously and fitted on this aircraft, rest of the internal systems will be integrated into the aircraft on arrival to India. DRDO has contracted to procure three EMB 145I from Embraer and this aircraft will be the first delivery towards meeting this endeavour”. Centre for Air Borne Systems (CABS), a premier DRDO lab is the nodal laboratory entrusted with the responsibility of delivering the AEW&C system, a force multiplier. CABS, is developing the system with sister DRDO labs, public and private sector units.
DRDO