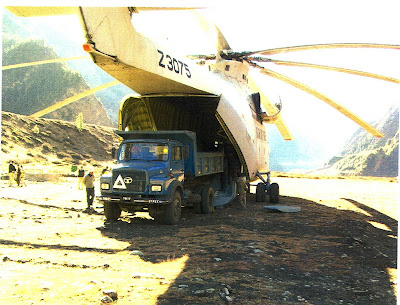 126 Helicopter flight, christened ‘Featherweights’ was raised at Chandigarh on 15 May 1986.The unit was established to fly the Mi-26 helicopter, the largest and heaviest helicopter in the world, a very formidable machine capable of versatile roles. The flight lives by the motto ‘Aaptsu Mitram’ which means a friend who is always around to help when tragedy strikes. The ‘Bhim’ of the Indian Airforce has till date flown almost 8000 hours carrying 13559 tons of load.

The flight has the unique distinction of operating the world’s heaviest helicopter in the highest and coldest battlefield in the world, the Siachen Glacier. The flight has undertaken flood relief operations in different parts of the country as well as relief operations during the Orissa Supercyclone of 1999. The flight played a major role in avoiding a Bhopal like gas tragedy at Paradeep Phosphates Ltd where the Ammonia gas tanks needed to be cooled at the earliest to prevent the gas from leaking out. The flight airlifted heavy duty generators which were used to cool the storage tanks thus avoiding a major disaster. The flight was also actively involved in the Kargil war wherein it performed numerous missions by day and night.

Another unique feature of the Mi-26 helicopter is its ability to carry very heavy (weighing upto 20 tons) and odd shaped loads slung under its belly. The flight has played a major role by airlifting various aircraft - fighters, helicopters and even a civilian passenger plane. Featherweights have played another big role in nation building by transporting heavy loads of the Konkan Railways Corporation Ltd which was entrusted with the task of laying the railway line between Jammu and Banihal. The flight also regularly undertakes air maintenance sorties to the highest Advanced Landing Ground (ALG) Daulat Beg Oldie (DBO) at an elevation of 15,500 feet above mean sea level. The flight was instrumental in making the ALG at DBO fit for use by the fixed wing transport aircraft by airlifting heavy machinery like dozers and rollers to DBO.

The flight also played an important role in the revival and reopening of Vijaynagar ALG in the North Eastern state of Arunachal Pradesh. All sorts of heavy machinery and construction material were transported in the Mi-26 to make the ALG fit for landing. The flight has been closely associated with various projects of the Defence Research and Development Organisation (DRDO). The Mi-26 has time and again been called upon to lead various helicopter formations on occasions like the Air Force Day parade, Republic day parade and Presidents fleet review.

The flight at present is commanded by Group Captain JVS Guron VM. As the flight completes 25 years of exceptional service, the air warriors of 126 HF look forward to continue the good work of nation building.