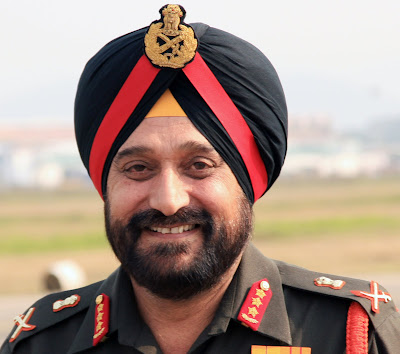 The Eastern Army Commander, Lt Gen Bikram Singh, PVSM,UYSM,AVSM,SM,VSM,ADC has been designated as the next Chief of Army Staff, in the rank of General, with effect from the afternoon of 31 May 2012. He will succeed the present COAS, General VK Singh, PVSM,AVSM,YSM,ADC, who retires from the service on 31 May 2012.

During his long and distinguished career, spanning nearly 40 years, he has served in a variety of Command and Staff appointments. He has commanded a Corps in the Northern Command. The General had served as Deputy Force Commander of a multi-nation UN Peace Keeping Mission in Congo. He had also served as UN Observer in Nicaragua and El Salvador during the early 90s.

Lt Gen Bikram Singh has studied with distinction at the Defence Services Staff College, the Army War College and the US Army War College, Pennsylvania. He has also done M.Phil in Defence Management from the Indore University.

He is a recipient of PVSM, UYSM, AVSM, SM and VSM Awards. He is also one of the Honorary ADCs of the President of India.

He is married to Mrs Surjeet Kaur, housewife and the couple have two sons.