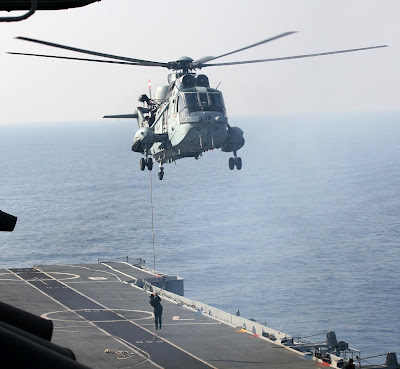 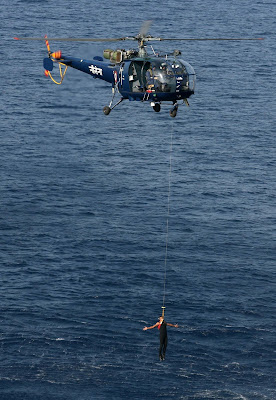 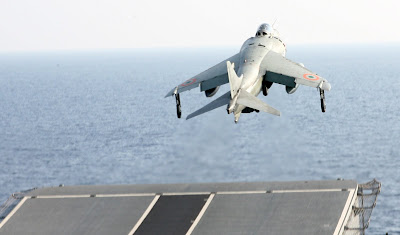 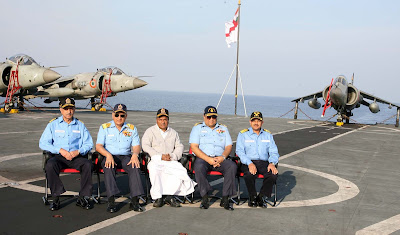 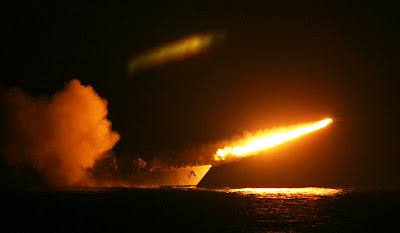 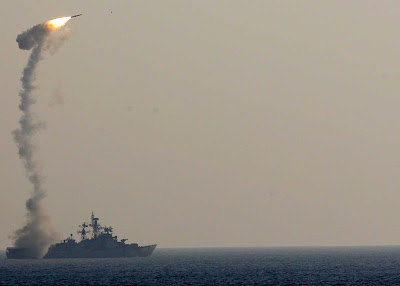 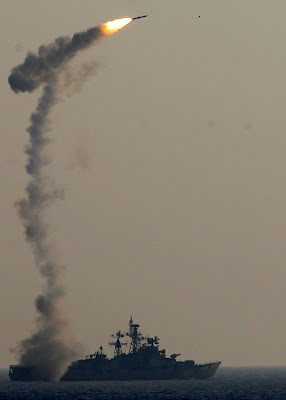 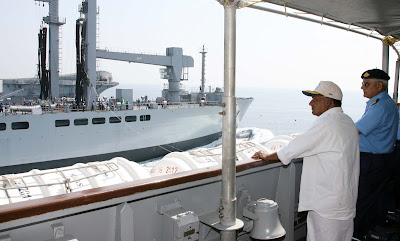 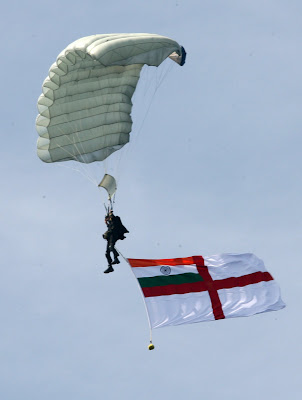 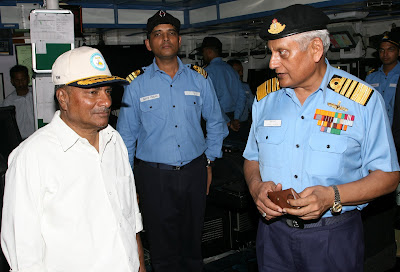 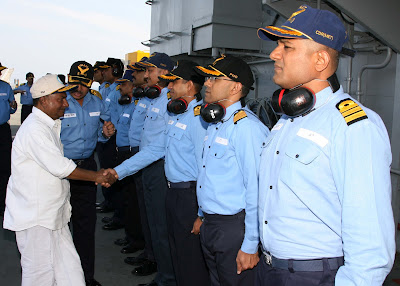 The Defence Minister Shri AK Antony spent two days with the Indian Navy on Feb 07-08, 2012. The Defence Minister was given a glimpse of the expansive scope and scale of the Indian Navy’s annual Theatre Level Readiness and Operational Exercise (TROPEX) over the two day visit with the Chief of Naval Staff Admiral Nirmal Verma and the Flag Officer Commanding-in-Chief, Eastern Naval Command Vice Admiral AK Chopra in company.

In the backdrop, were two completely networked fleets, widely dispersed across seas in the Indian Ocean, operating in a dense electronic environment to match their professional and technical proficiency. New platforms, weapons sensors, communication systems and tactics were being tested and tried to optimize the net combat power of the fleets. Over forty surface combatants of various classes, submarines and a large number of aircraft including UAVs are participating in the exercise. As would be the case in any operation of the twenty first century, the exercise had a jointmanship element as IAF aircraft such as AWACS, Sukhois, Mirages and Jaguars also participated.

Whereas the quick integration of new ships was a reflection of the Indian Navy’s high standards of professionalism in operations and training, the sustenance of potency and combat efficiency of a couple of surface combatants over a few decades old, reflected the Indian Navy’s sound maintenance practices and technical prowess.

The transformation of the Indian Navy to a future ready network enabled force was epitomised in INS Shivalik but the Defence Minister also saw a reflection of the same on his visit to INS Viraat. INS Viraat, the Flag ship of the Western Fleet, demonstrated the power of a networked force as operational plots and pictures from remote sensors were transferred and collated in a flash to present a comprehensive picture of the Battlespace and effect optimal use of the weapons on board the various potent ships. The recently upgraded Sea Harriers proved their lethality with ranges extended by Air to Air refueling and BVR missiles. Su 30MKI aircraft, Mirages and Jaguars, being directed by an IAF AWACS, operating over sea for the first time tested the Air Defence capability of the INS Viraat even as the ships were operating in a Multi- threat scenario. During this battle the Defence Minister witnessed, first hand, the potency of the upgraded Sea Harriers particularly in the networked environment.

A critical part of Anti Missile Defence being Surface to Air Missiles (SAM), the Defence Minister witnessed the successful interception of a fast, low flying, Surface to Surface missile by a SAM. A clear night with a full moon laid an idyllic setting for this demonstration of power and professionalism.

The Defence Minister witnessed a successful and impressive launch of the Brahmos, supersonic long range anti shipping missile, from a recently up-graded Ranvir class destroyer. This was particularly satisfying as the launch of the missile was an affirmation of our indigenous weapon capabilities.

The Defence Minister also witnessed a full scale air power demonstration from INS Viraat with Seakings, Sea Harriers and Chetaks participating. Whilst on board INS Viraat, Shri Antony was also shown the reputed professionalism of the MARCOS as they carried out a precision landing on the flight deck in the middle of the sea using Combat Free Fall technique.

Addressing the 'Viraatees' he said he was “very very happy to be on India's most prestigious INS Viraat” the Minister added that by early next year the Indian Navy is likely to operate one more aircraft carrier Vikramaditya and the Indigenous Aircraft Carrier some years later. Stating that 26/11 changed the security matrix he said that the entire nation now acknowledges the critical requirement of maritime security and the important role of the Indian Navy. Complementing the men on their professionalism, the Minister added “...wherever we go (abroad), Indian Navy is the most sought after service...numerous countries want more cooperation with the Indian Navy. Acknowledging the difficult working conditions afloat, the Defence Minister said “I know how more ships alone is not important, your welfare is also very important. I assure you one by one we are improving your service conditions and living conditions”. The Minister assured the men that he would do “whatever is humanly possible” to improve the conditions of service. On completion of his two day visit, very happy with what he saw, Shri Antony said “The Indian Navy is increasing its capability to meet their ever increasing challenges and responsibility successfully. The country is proud of the capabilities and dedication of the Indian Navy”. He expressed his confidence in the IN by saying “We can be confident that maritime security including coastal security of our country is in the safe hands of the Indian Navy”.

TROPEX 2012 will continue over the next few days and the successful missile launches and interceptions, uninterrupted seamless operations in a networked condition with BVR interceptions herald the emergence of a capable and potent 'future ready' Indian Navy.

Shri Antony has since returned to New Delhi.