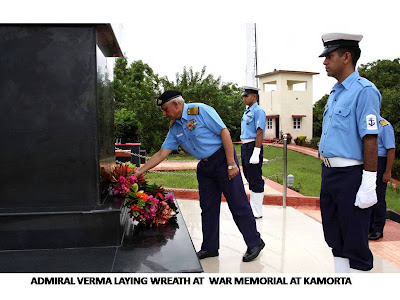 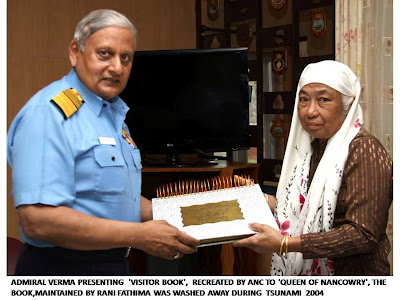 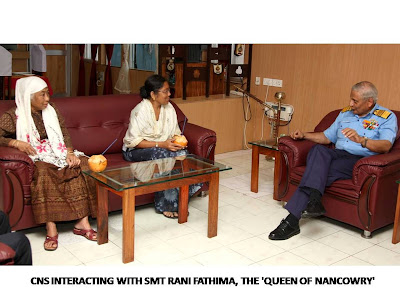 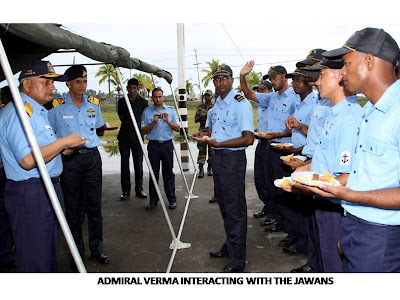 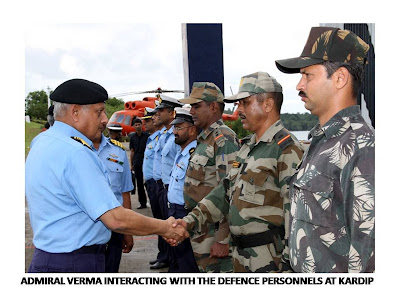 Admiral Nirmal Verma, Chairman Chiefs of Staff Committee, today visited the far lying reaches of the Andaman and Nicobar Islands to meet jawans, sailors, airmen, naviks, GREF and DSC personnel who are resolutely serving in the remote maritime frontiers of the nation, more than 1500 kilometres from the mainland.

Admiral Verma first arrived at Car Nicobar and interacted with IAF personnel manning the Air Force Station at Carnic. He thereafter proceeded to Naval Air Station Campbell Bay, established on the Great Nicobar Island, the southernmost island in the Nicobar chain of islands. The strategically located Campbell Bay dominates the six degree channel. Admiral Verma inspected the progress made in the ongoing efforts to augment infrastructure. While speaking to the men the Admiral expressed his satisfaction over the improvement of infrastructure and his anticipation for further progress in this regard. He enquired about their interaction with the local communities and was pleased to learn that there was amongst other positive facets, a competitive spirit in the arena of sports which he opined was very important and healthy for each individual posted in these remote locations.

Admiral Verma went on to visit INS Kardip, located on Kamorta Island, a part of the Nancowry group of Islands. At Kamorta, Admiral Verma laid a wreath and paid his respects at a War Memorial which dates back to the end of World War II. INS Kardip, commissioned in 1973, serves a key function of providing operational support to IN and CG ships operating in and around the Nicobar Islands. Once again, the Admiral was pleased to see the 'josh' and resolve of the men serving in these remote locations.

During this visit to Kamorta Island the Admiral also called on the respected octagenarian Smt Rani Fathima, the 'Queen of Nancowry' since 1989. He also interacted with the Chairperson of the Tribal Council, Smt Ayesha Majid. Admiral Nirmal Verma was especially pleased to be able to present to Smt Rani Fatima a reconstructed 'visitors book'. The famed 'visitor's book' maintained by Rani Fathima, Queen of Nancowry, had significant historic value but was washed away during the Tsunami of 2004. The Headquarters, Andaman and Nicobar Command recreated the visitor's book from digital images kept in custody of Vice Admiral (Retd) OP Bansal, who was the Commander-in-Chief of the Andaman and Nicobar Command. This gesture was immensely appreciated by the Rani who was moved on seeing the restoration of her family’s history dating back to 1946 which is a national heritage.

Admiral Nirmal Verma is on a three day visit to the Andaman and Nicobar Command which is hosting 'MILAN', a biennial gathering of friendly navies. MILAN 2012 has 14 foreign navies participating.