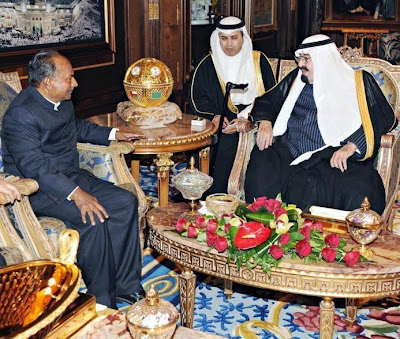 Ahead of his talks with his Saudi Counterpart on defence cooperation, the Defence Minister Shri AK Antony called on King Abdullah bin Abdul Aziz Al Saud in Riyadh yesterday.

The meeting, which took place shortly after the arrival of Mr Antony in Riyadh, lasted thirty minutes.

During the meeting, the two leaders expressed satisfaction that both the countries are pursuing enhanced cooperation in pursuit of the strategic partnership, especially in security, defence, economic and political fields.

Displaying enormous warmth, King Abdullah fondly remembered the role played by Prime Minister Dr Man Mohan Singh to India-Saudi Arabia Relations. He recalled his visit to India in 2006 when the Delhi Declaration was signed setting forth the vision for the two countries to cooperate in various fields. The reciprocal visit by the Prime Minister Dr Man Mohan Singh to the Kingdom in 2010 raised the level of bilateral engagements to strategic level by signing the Riyadh Declarations. King Abdullah offered all assistance, including additional supply of crude oil, should India require the same. He expressed eagerness to strengthen relations with India. King Abdullah condemned all forms of terrorism. He paid rich tributes to émigré Indians who have played a significant role in enriching the economy and the social life of Saudi Arabia.

Shri Antony hoped that his discussions with with Prince Salman and Prince Khalid today will lead to specific initiatives to deepen the defence exchanges to the benefit of both the countries.

Shri Antony said the current situation in the Gulf region is cause for great concern for India and he hoped that the crisis in the region will be resolved through peaceful dialogue.

Later addressing the Indian Community, Shri Antony described the Kingdom of Saudi Arabia as an important strategic partner of India in the region. He said the Gulf Region has an immense importance in our foreign policy. It provides more than half of our total crude oil imports. The region is perhaps the largest trading partner of India with the total two way trade of over $130 billion in 2010-11. Shri Antony said over 6 million Indians live and work in the region and we appreciate the assistance of their host governments towards their safety and well-being.

Talking about India’s economic successes, he said, this has been achieved within the framework of our democratic and secular order.

“In this order, every Indian enjoys freedom to pursue his beliefs and aspirations and has rights to ensure he can realize his dreams with the assurance that the State will protect his unique identity and individuality. But with these freedoms and rights, we have the corresponding responsibility of ensuring that all our actions take place within the framework of the Constitution and promote the interests of our nation. Though major challenges still remain, it is a matter of satisfaction for all of us that our Constitution remains the guardian of our nationhood and our national values”, he said.

The Defence Minister, who is on a two-day visit to Riyadh, said, India is working closely with all countries in the Gulf region in a co-ordinated manner to combat terrorism and for anti-piracy measures. Shri Antony expressed confidence that his visit will give a ‘new substance and direction’ to Indo-Saudi defence ties, which constitute an important component of the emerging strategic partnership between the two countries.