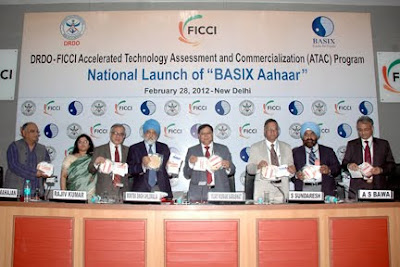 Shri Montek Singh Ahluwalia, Deputy Chairman of the Planning Commission, launched ‘Aahaar’, the DRDO-developed high shelf life dal and roti packs, at a function here yesterday to cater to the needs of the ‘Aam Aadmi’, use during long journeys, nutritional feeding, catering programmes and other similar civilian applications.

Giving the keynote address at the launch function, Shri Ahluwalia urged the ‘Aahaar’ project collaborators – DRDO, BASIX (a social enterprise group) and FICCI - to explore the possibility of integrating the project with the mid-day meal scheme and the integrated child development scheme with “acceptable fortification’ to serve the nutritional requirements of children between the ages of three and six.

He said that as women in rural areas get engaged in larger numbers in farming activities, rural India is bound to generate local demand for the dal and roti packs. The involvement of women self help groups in the formation of small production units using DRDO food technologies would go a long way in enhancing livelihoods of the rural community, he said.

Dr. Saraswat, Scientific Advisor to Raksha Mantri and Secretary Deptt of Defence R&D, & DG DRDO in his address stated "DRDO not only develops state of the art weapon systems for our armed forces, but also innovative technologies and processes to keep our forces fighting fit. DRDO’s life sciences labs have made tremendous contribution to the armed forces, right from scientifically selecting personnel with suitable physical and psychological state of preparedness, to helping them perform with high efficiency and effectiveness, even under extreme stressful conditions. Technologies to provide packaged ready to eat nutritious food meeting Indian tastes and traditions belong to one area. Through BASIX we expect the benefits of these innovative products could reach millions in the civil society and further help generate employment and contribute to inclusive growth as this engagement with BASIX has the potential to generate large employment at the bottom of the pyramid. I congratulate FICCI team for their continued support to DRDO”.

Welcoming the guests, Dr. Rajiv Kumar, Secretary General, FICCI, said, “This landmark initiative will go a long way in providing succour to the poor as it would cushion them in large measure from food inflation that has been raging for some time now. It will also become a key instrument in meeting the challenge of providing our teeming millions with cheap, hygienic and nutritious food.”

Speaking on the occasion, Shri Vijay Mahajan, Managing Director, BASIX Group said “BASIX is using DRDO research for enhancing food security for the masses by bringing this product to the market.”

According to Shri S. Sundaresh Chief Controller R&D, DRDO, "the tripartite MoU between DRDO, FICCI and BASIX is yet another initiative under ATAC. With FICCI creating a dedicated team for food technologies, I am confident in the coming months, we will have many more technologies reaching the commercial space through this initiative”

Dr. A.S. Bawa, Director of the DRDO Food Research Lab at Mysore, pointed out that “Chapaties are highly perishable and spoil within 24-36 hours depending upon storage conditions due to microbial spoilage. With DFRL technology the shelf life has been extended to more than 12 months and retains both nutrition and taste. For the instant dal and chana mix, cold shock dehydration technology has been mastered and patented by DFRL for making a variety of tasty convenience mixes which can be reconstituted within 6-8 minutes with a shelf-life of more than 12 months under ambient conditions. These products are eminently suitable for use during long journeys, nutritional feeding, catering programmes and other similar civilian applications”.

Shri S. Radhakrishnan, Director, Industry Interface and Technology Management, DRDO, said “this new engagement with BASIX is in fact an innovation within innovation – ATAC being the first.

Under the FICCI-DRDO Accelerated Technology Assessment and Commercialization (ATAC) Programme, Defence Research and Development Organisation (DRDO), BASIX - a Social Enterprise Group, and Federation of Indian Chamber of Commerce and Industry ( FICCI) have come together to collaborate on long term basis to develop and execute viable and scalable models for commercialization of the technologies developed by DRDO with the specific intent of developing and enhancing livelihoods. The three partners will identify and commercialize sub-set of technologies/products/processes developed by DRDO focussing on the base of the pyramid as both producers and consumers and thereby improving the lives of the disadvantaged and creating lievlihoods for them.

Initially, this collaboration will focus on the food technologies developed by Defence Food Research Laboratory (DFRL), formed under the aegis of DRDO. The aim of the project is to build women-oriented enterprises using food technologies of DFRL. The first pilot project under this collaboration is ‘Aahaar’ that encompasses a set of technologies and products including ready-to eat Roti, and two variants in dal - instant Palak Dal with Masala Channa curry mix. BASIX shall subject the identified technologies/products/processes to three levels of testing viz. Technical Feasibility, Economic Viability and Consumer Acceptance.

BASIX will play the lead execution role in bringing together all aspects of this project and conduct the commercialization pilot. The pilot will involve developing a model of creating small production units comprised predominantly of women, by organising and building of a range of skills and deploying simple technologies developed by DFRL. For the consumer, Aahaar is a hygienic, nutritious and convenient meal that tastes fresh yet has longer shelf life, that is tasty yet quick to serve. Roti has a shelf life of 15 days and the two variants of dal have a shelf life of
12 months. This is a differentiated and unique positioning in the market place in this category of foods.

The project has been designed in three stages: (a) test market to test key hypothesis on supply and demand side using the women groups as the key customer interface resource (b) Post establishing the model, a pilot stage will commence with women groups as producers and it is envisaged that 2-3 such units will be set up. . Women will be organised, extensively trained and set-up as high quality and viable production units for making a variety of ready-to-eat/instant foods; The pilot phase will exhaustively test and establish technical viability, commercial scalability and consumer acceptance. (c) Post the pilot phase it is intended to scale up the project and reach out to set up multiple production units catering to the needs of multiple market segments and commercial opportunities available for these products.

The test market for Aahaar has just been concluded in the cities of Delhi and Bangalore.