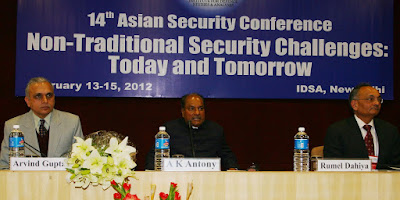 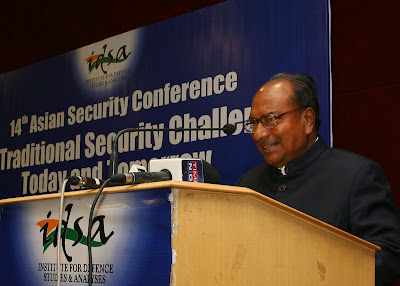 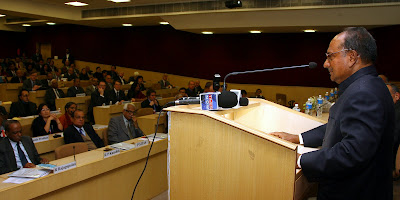 Defence Minister Shri AK Antony inaugurated the 14th Asian Security Conference here today. Organised by the Institute for Defence Studies and Analyses (IDSA), the theme of the conference is ‘Non-Traditional Security Threats: Today And Tomorrow’. Experts from India and abroad, including three from China, are participating in the three-day conference. The ASC is an annual conference organized by the IDSA since 1999.

Following is the text of the Presidential Address delivered by the Defence Minister on the occasion:

"At the outset, I extend a warm welcome to all the participants from the world over for the 14th Asian Security Conference organised by IDSA.

The concept of security has expanded and undergone a massive transformation to include economic progress, particularly given the direction the global economy has been taking, climate change and good governance. Such issues have assumed heightened significance for the comity of nations.

Over the years, Asian Security Conference has emerged as an ideal platform for academicians, researchers, scholars and security experts to discuss and analyse the recent trends in security across the world. The Conference is a unique opportunity to understand each other's perspectives and identify common issues for cooperation.

Today, the global community faces common challenges in the realms of economics, geopolitics, demography, sharing natural resources, climate change and information. The impact of basic issues such as food, water, economic instability and security-related issues such as terrorism, proliferation of weapons of mass destruction (WMD) and drug trafficking is having an impact on the dynamics of various societies and nations.

As one of the fastest growing economies of the region and a stable democratic nation, India has been and will continue to be committed towards building a peaceful, secure and economically stable Asia. However, to address such non- traditional challenges, we also need to move beyond conventional ways of dealing with them.

IDS A has been discussing these and other such issues since the first Asian Security Conference held in 1998. Late Shri K. Subrahmanyam had identified thirteen types of non-military threats to security, some of which I have just mentioned. IDSA has brought out publications on related themes, which include reports on climate change, environmental security and water security.

The themes for this year's Conference are extremely crucial and relevant. The threat to the overall security and well- being of the people from non-traditional factors continues to pose a threat to nations in general and Asiat in particular. With the world population putting an enormous burden on existing natural resources, competition for these resources can lead to conflicts among various countries in Asia.

Terrorism, drug trafficking, money laundering and transnational crimes are common concerns the world over. Terrorism continues to remain a grave concern to world peace and stability. Nations must draw up collective and innovative measures to counter and defeat such asymmetric threats. Weapons of mass destruction go beyond nuclear weapons. These weapons may be biological, chemical and radiological, in nature. Often, these weapons do not require sophisticated delivery systems. There is always a danger that these weapons may fall into wrong hands. Thus, nations need to cooperate with each other and draw up a comprehensive approach to evolve institutional frameworks to defeat such challenges.

Natural disasters seem to be occurring with regularity. The destruction caused by Tsunamis has killed thousands of people. Earthquakes and floods too have caused havoc in various nations. We need to develop common institutional mechanisms to deal with such disasters. Disaster management occupies an important place in our policy and must be taken down to regional and local levels in our region.

We have been trying to address such concerns for a long time. For instance, in 1982, the Ministry of Defence initiated the Ecological Task Force (ETFs) to restore degraded ecosystems. These Task Forces have been undertaking afforestation, soil conservation and water resource management techniques. India is also the only country in the world to form a ministry for new and renewable energy. We have also drawn up a National Action Plan for Climate Change and set up an Advisory Council, chaired by the Prime Minister.

Climate change too has an impact on security. It is causing floods and resulting in changes in crop yields and crop patterns. The per capita availability of water is decreasing sharply worldwide. Water is actually fast emerging as a major source of insecurity and a potential issue for conflict among nations. Thus, nations need to cooperate on sharing water and efficient water usage and harvesting and initiate collective action for preserving our common environment.

Energy is a source of competition among nations for energy demands. Energy sources like fossil fuels are required for economic growth and development. However, as fossil fuels are depleting at a rapid pace, nations and societies need to focus on alternative sources of energy to meet our needs.

Cyber security is a critical area of concern. With digitisation of world and various services, the world is becoming increasingly dependent on internet and information technology. However, security of networks has become an urgent concern, as enormous vital and critical data passes through them every day. Any breach of cyber networks can cause untold damage to the security of any society," or country. Nations must take serious and prompt note and cooperate with each other to strengthen seamless cyber security.

United Nations and other multilateral institutions will continue to play a proactive role. However, the time has come for Asian countries to set up a mechanism to take regular contact and dialogue mechanisms to the next higher level. A network of prominent Asian think-tanks to hold regular dialogues on security issues can make common recommendations to governments to help them address such challenges in an effective manner.

Peaceful coexistence and equitable development are the keys to the future and security of nations in the Asian region. I am sure that all of you will hold comprehensive deliberations on these issues and other common challenges, as well as come up with innovative and new ideas to aid planners and policy makers.

With these words, I wish all the participants, particularly from abroad, a pleasant stay in India. I wish you all the very best for your fruitful discussions at the Conference over the next three days.”