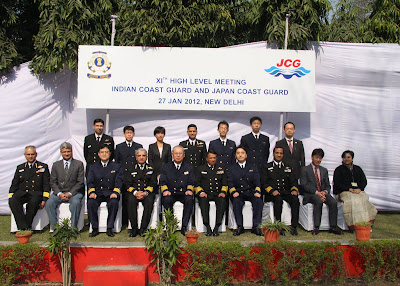 The visit of a high level Japanese delegation led by Admiral Hisayasu Suzuki, the Commandant, Japan Coast Guard (JCG), for the XI High Level Meeting and Combined Exercises with the Indian Coast Guard (ICG) concluded today. The five-day visit, was in pursuance of the Memorandum of Cooperation (MoC), signed between the two Coast Guards on 24 November 2006, which stipulates that the heads of the two organizations meet alternately in India and Japan, to discuss maritime issues of mutual concerns and formulate a cooperative approach to address these.

The Memorandum of Cooperation between the two Coast Guards encompasses issues of maritime search and rescue, combating marine pollution, technical assistance for responding to natural disasters and exchange of information regarding crimes at sea, including smuggling and illicit trafficking.

The first ICG-JCG combined exercises were carried out in November 2000 off Chennai, in which one JCG ship participated and was overseen by a high level delegation of JCG, led by the then Commandant of JCG. This also laid the foundation for development of close interaction between the two organisations that included regular visits and exercises, sharing of information and expertise and training visits.

During the 11th ICG-JCG High Level discussions, it was mutually agreed to strengthen the cooperation on evolving collaborative approach, in addressing a spectrum of maritime issues concerning safety and security. The visit was also very significant in providing renewed impetus to strong ties that exist between the two Coast Guards as the Japan Coast Guard Ship has visited India, after a gap of six years, for the combined exercises with the ICG off Chennai.

A delegation from the Information Sharing Centre, Singapore established under the Regional Cooperation Agreement on Combating Piracy and Armed Robbery against Ships in Asia (ReCAAP) also participated in the exercise. This was significant in furthering the interaction among the participating agencies on anti-piracy issues.