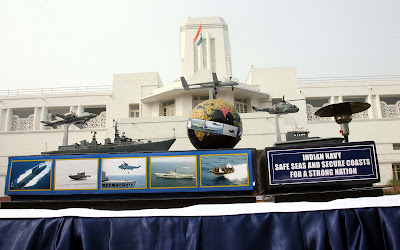 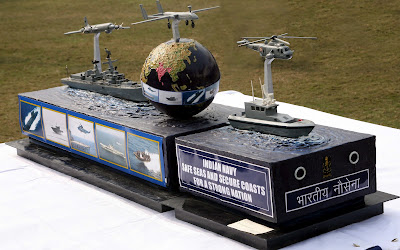 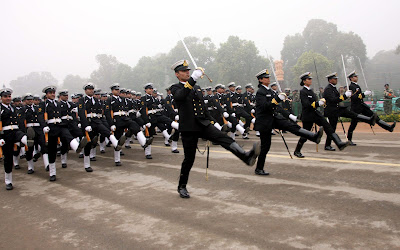 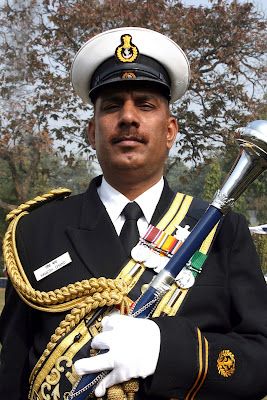 The Naval contingent and tableau for the 63rd Republic Day Parade was presented to the media today by Commodore Atul Kumar, Principal Director Personnel Services of the Integrated Headquarters of Ministry of Defence (Navy).

The Naval contingent consists of 144 men and women in the traditional Black winter uniforms replete with brass buttons polished to a golden sheen, boots impeccably polished and contrasting strikingly with sparkling white anklets. The contingent commanded by Lt Cdr K Manikandan, will also have three Platoon Commanders of the rank of Lieutenant. The contingent comprises men drawn from ships and establishments across the country. Men who by training are variously gunners, submariners, anti submarine warriors, radar plotters, signalmen, engineers and logisticians have been training for over four
months and have been practicing marching down the Rajpath for over a month.

The marching contingent is supported by the Indian Naval Brass Band comprising 81 musicians led by Ramesh Chand Katoch, Master Chief Petty Officer, Musician First Class. It is particularly noteworthy that MCPO Ramesh Chand is participating in the RD parade for the 25th year in succession and has been leading the band for the last fourteen years.

In keeping with the theme for 2012 'Safe Seas and Secure Coasts for a Strong Nation', the Naval tableau showcases the multidimensional aspect of the Indian Navy engaged in ensuring safe seas in our region
besides securing India's long coast line.

On the trailer are the models of the 'Delhi' Class guided missile Destroyer, IL-38 (Sea Dragon) Long Range Maritime Reconnaissance aircraft and a UAV positioned atop a globe showing Indian Ocean Region, indicative of the global reach of the Indian Navy.

On the tractor is a model of the recently inducted Fast Interceptor Craft giving requisite boost to the coastal security and a Sea-king helicopter which acts as a force multiolier both at sea against pirates and securing India's long coastline.

IN Ships have sailed extensively across the Indian Ocean Region and have in addition operated in the Pacific Ocean and Mediterranian Sea. The Indian Navy has also provided assistance as sought by IOR
littorals such as Seychelles, Mauritius and Maldives in maintaining EEZ patrols in their waters.