Austrian Eurofighter On Duty During World Economic Forum In Davos 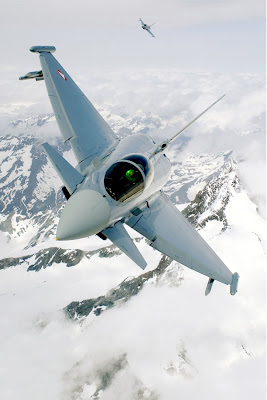 From the 24th to the 29th January, Austrian Eurofighter Typhoons will again protect the skies over the World Economic Forum in Davos, Switzerland.

The operation known as “Daedalus 12” will see four Austrian Eurofighters deployed to protect the area in a temporary no-fly zone over Western Austria and Davos in particular. The Eurofighter will work alongside Austrian Air Force turboprop PC-7 trainers and OH-58 Kiowa helicopters protecting the skies against potential ‘slow moving aerial threats’ for the duration of the Forum.

This task, in full coordination with the Swiss authorities, demonstrates the perfect interoperability of the Alpine Air defence system and builds on the successful experience gained from previous operations including the Euro 2008 football championships in Austria and Switzerland as well as the World Economic Forum meetings in Davos in 2011.