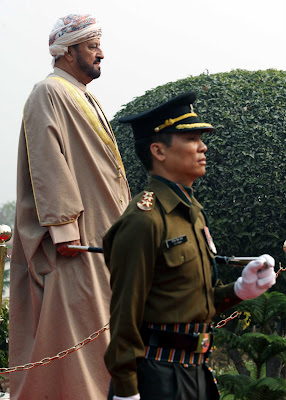 India and Oman have extended the validity of the existing bilateral Memorandum of Understanding (MoU) on Military Cooperation, signed in December 2005, for a further period of five years. The documents were signed by the Defence Minister Shri AK Antony and the visiting Minister Responsible for Defence Affairs of the Sultanate of Oman, His Excellency Badar bin Saud bin Harib al Busaidi here today.

Bilateral defence cooperation between India and Oman has been growing over the years. The Navies of both countries are conducting a joint exercise “Naseem Al Bahr off the coast of Mumbai from December 26-31, 2011. The IAF and the Royal Air Force of Oman held a joint exercise “Eastern Bridge” at Jamnagar, Gujarat in October earlier this year.

During the delegation level talks both sides noted that bilateral defence cooperation activities have been progressing satisfactorily. The 5th meeting of the India-Oman Joint Military Cooperation Committee was held recently in India in September, 2011.

Both the Ministers discussed important issues relating to regional and maritime security. Shri Antony noted that incidents of piracy were taking place close to the Oman coast and have also been spreading close to the Lakshadweep Islands. Both Ministers stressed the need for continued and concerted efforts of the world community to effectively address the problem.

Shri Antony conveyed that the visit of the Oman Defence Minister is an important step in continuing the dialogue on defence and security issues between the two countries.