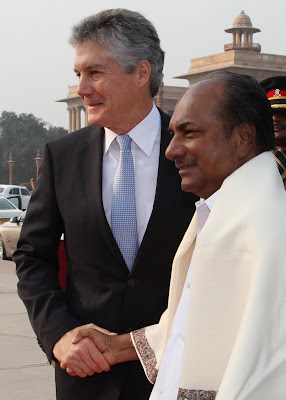 India and Australia held fruitful discussion on Defence Cooperation today with the Defence Minister Shri AK Antony stressing that New Delhi looks forward to developing its exchanges with Australia both at the bilateral and multilateral fora such as the ASEAN Defence Ministers’ Meeting Plus (ADMM Plus) etc.

Describing the visit of the Australian Defence Minister Mr. Stephen Smith as an important milestone in the evolution of the Indo-Australia Strategic Partnership, Shri Antony said the two countries are important members of the Commonwealth and the Asia-Pacific Region. India and Australia are currently Chair and Vice-Chair of IOR-ARC (Indian Ocean Region Association for Regional Cooperation).

Mr. Smith is on a three-day visit to India. On his arrival at the South Block, he was warmly received by Shri Antony, the Defence Secretary Shri Shashikant Sharma and other senior officials of the Ministry of Defence. A tri-Services Guard of Honour was presented to Mr. Smith.

During the talks, both sides noted that the bilateral Defence Cooperation activities are gradually strengthening. They noted that the inaugural session of the Defence Policy Talks held in New Delhi in December last year and the ongoing Service-to-Service Staff Talks are important mechanisms for developing constructive and mutually beneficial interactions between the Defence Establishments of both the countries. The two sides also noted that the practice of the respective Navies conducting Passage Exercises (PASSEX) during Naval Ship Visits to each other’s ports have proved to be beneficial and that these should continue. Both Ministers also agreed to examine the possibility of undertaking a full-fledged bilateral Naval Exercise in the future.

The two Defence Ministers agreed to institute Track 1.5 Dialogues (semi-government level) on Defence Matters between suitable institutions of both sides. Mr. Smith invited Shri Antony to visit Australia next year, which has been accepted by the latter.

Regional Security issues also came up for discussion at the 40-minute meeting. Both sides agreed that the challenges in the area of Maritime Security like piracy and freedom of navigation are important issues which required concerted efforts of the global community.