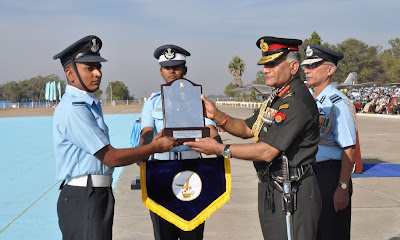 A total of 175 Flight Cadets including 30 Women Flight Cadets passed out of the Air Force Academy, Dundigal, Hyderabad, as newly commissioned officers to join the Indian Air Force in respective branches today.

In his address to the newly commissioned officers, General VK Singh, impressed upon building up of intrinsic qualities of leadership, by placing the highest value to honor, integrity and selflessness. He exhorted the newly commissioned officers to place the interest of the country, the service and subordinates before one’s own, always and every time He also emphasized on transcending all ethnic, religious and regional differences in order to promote a stronger India through an integrated approach.

The Parade also saw the participation of Air Warrior Drill Team which thrilled the audience by its smart and synchronized drill movements. There was a traditional fly past by Hawk, AN-32, Dornier and Kiran aircraft. An exhilarating and outstanding low level aerobatic display by SU-30 aircraft, kept the audience spell-bound. A breath taking dare devil display by Akashganga paratroopers was appreciated by one and all. A large number of retired and serving defence officers, civilian dignitaries, service personnel and their families witnessed the grand parade.

General VK Singh had arrived at Air Force Academy on 28 Dec 11 and was received by Air Marshal D Kukreja, Air Officer Commanding- in-Chief, Training Command, and Air Marshal PR Sharma, Commandant, Air Force Academy. He attended a ceremonial Guest Night with passing out Flight Cadets and their parents wherein he awarded the trophies and medals to the cadets who excelled in their respective branches, as has been the custom.