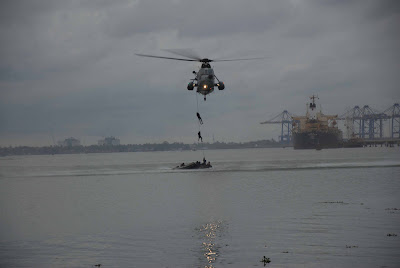 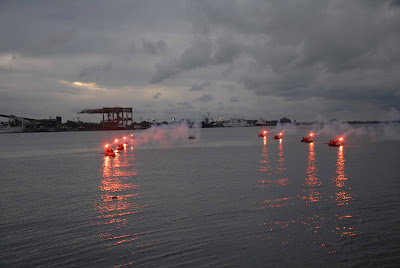 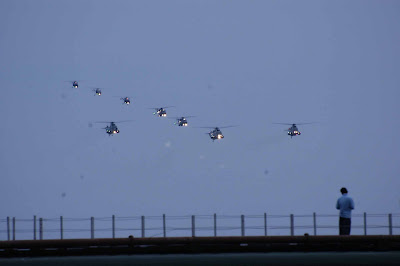 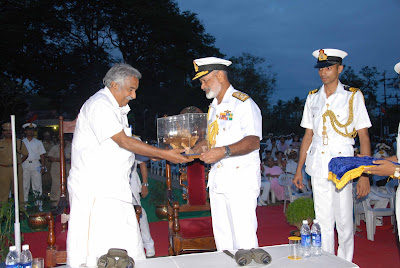 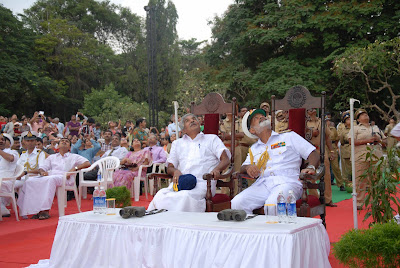 Southern Naval Command conducted an awe inspiring demonstration of its operational capabilities for the city of Kochi today at the waterfront facing Rajendra Maidan and Netaji Subhash Park. The entire spectrum of naval operations was included in the display; within the limitations imposed by depth restrictions of the channel and other technical limitations. Shri Oommen Chandy, Chief Minister of Kerala was the Chief Guest at the event where the residents of Kochi turned out in huge numbers. The Chief Guest was received at the venue by Vice Admiral KN Sushil, Flag Officer Commanding in Chief Southern Naval Command.

The function organized as part of the impending Navy day celebrations, started with a fly past by various Navy aircraft including the giant TU- 142 aircraft from Chennai and the IL-38 from Goa. Thereafter the marine Commandos carried out a simulated beach reconnaissance and assault with the leader of the team coming ashore in his menacing combat rig to deliver the programme brochure to the Chief Guest. This was followed by a demonstration of water sports including waterskiing and jet skiing. Next, the Indian Navy Sky Diving team swooped down from a Seaking helicopter. The next item was the demonstration of a VBSS (Visit, Board, Search and Seize) operation where the Commandos in fast rigid inflatable boats surrounded a simulated hostile vessel and overpowered it. The helicopter demonstrations included the Seaking helicopter flying past the crowd with an Ambassador car under slung, STIE( small team insertion and extraction) operation where commandos were dropped and withdrawn from a hostile area and helobatics by two Advanced Light Helicopters (ALH) built by Hindustan Aeronautics Limited. A Chetak helicopter of the Indian Coast Guard demonstrated landing on the helicopter deck of the missile corvette - INS Karmuk- which was underway. The work horse of the Indian Navy- the chetak helicopter, also demonstrated their versatile search and rescue capabilities. The Marine Commandos demonstration of a bayonet charge brought to focus their raw energy and menacing, destructive power. The commandos’ simulated clandestine attack on an enemy offshore installation and its destruction provided the viewers an awe inspiring and explosive spectacle.

INS Kabra, INS Kalpeni and two Indian Coast Guard Interceptor boats demonstrated their maneuvering skills by turning on the spot several times in the restricted waters of Kochi channel. The fly past of all participating aircraft of the Navy and Coast Guard in THANKYOU formation was heartwarming. After the solemn sun set ceremony, which brought to an end the demonstration, Navy and Coastguard ships steamed past with their illumination lights switched on.