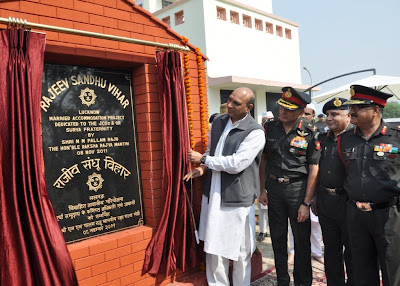 “Rajeev Sandhu Vihar” comprises of 570 Dwelling Units consisting of 70 for Junior Commissioned Officers (JCOs) and 500 for Other Ranks (ORs) spread in well laid down area of 38.1 Acres. It has 93 blocks of six Dwelling Units each and three blocks of four dwelling Units each. The colony is augmented with environmental friendly green building with features like Rain Water Harvesting, Arboriculture and Land scaped Open Spaces. Modular Sewage Treatment Plant with provisions for recycling waste water for gardening and Energy Efficient Ligting have also been co-opted.

The colony has been named “Rajeev Sandhu Vihar” in memory of Second Lieutenant Rajeev Sandhu of 7th Battalion the ASSAM Regiment. While serving with the Battalion, Second Lieutenant was posthumously awarded ‘Mahavir Chakra’ in 1990 for his act of gallantry, supreme sacrifice and devotion to duty displayed in “Operation Pawan” in Sri Lanka while fighting with LTTE militants. The memories of the brave soldier become alive when the colony named after him was inaugurated.

A total of 8459 Dwelling Units (DUs) were sanctioned in MAP Phase-I in Central Command. Out of which 2222 DUs were sanctioned for Lucknow comprising 138 units for Officer, 248 units for JCOs and 1836 units for ORs. These houses are spread in Lucknow Cantonment in seven different pockets.

hey u r back from US