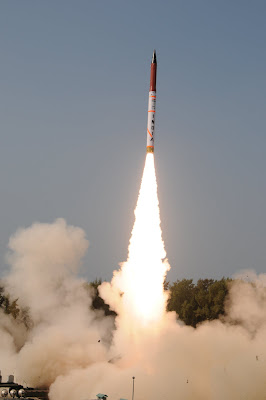 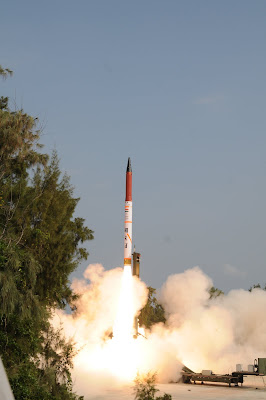 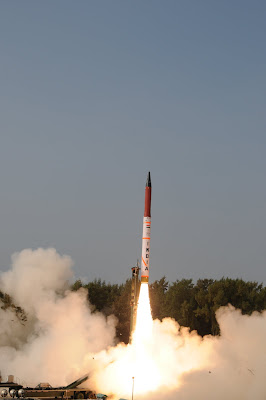 India today successfully test fired the most advanced long range missile system Agni-4 today i.e. 15th November 2011. The missile was launched from a Road Mobile System at 9.00AM from Wheelers’ Island off the coast of Odisha. The missile followed its trajectory, in a text book fashion, attained a height of about 900kms and reached the pre-designated target in the international waters of Bay of Bengal. All mission objectives were fully met. All the systems functioned perfectly till the end encountering the re-entry temperatures of more than 3000⁰C.

This missile is one of its kinds, proving many new technologies for the first time, and represents a quantum leap in terms of missile technology. The Missile is lighter in weight and has two stages of Solid Propulsion and a Payload with Re-entry heat shield. The Composite Rocket Motor which has been used for the first time has given excellent performance. The Missile System is equipped with modern and compact Avionics with Redundancy to provide high level of reliability. The indigenous Ring Laser Gyros based high accuracy INS (RINS) and Micro Navigation System (MINGS) complementing each other in redundant mode have been successfully flown in guidance mode for the first time. The high performance onboard computer with distributed Avionics architecture, high speed reliable communication bus and a full Digital Control System have controlled and guided the Missile to the target. The Missile has reached the target with very high level of accuracy. Radars and electro-optical systems along the Coast of Odisha have tracked and monitored all the parameters of the Missile. Two Indian Naval ships located near the target have witnessed the final event.

Honb’le Raksha Mantri Shri A.K. Antony congratulated the DRDO team on its achievement. Dr Vijay Kumar Saraswat, Scientific Advisor to Raksha Mantri, Secretary, Department of Defence R&D and Director General DRDO, who witnessed the launch, congratulated all the Scientists and employees of DRDO and the Armed forces for the successful launch of AGNI-4. Sri Avinash Chander, Distinguished Scientist, Chief Controller (Missiles & Strategic Systems), DRDO and Programme Director, AGNI while addressing the Scientists after the launch called it as a new era in the modern Long Range Navigation System in India. He said, “this test has paved the way ahead for the success of AGNI-5 Mission, which will be launched shortly”.

Smt. Tessy Thomas, Project Director AGNI-4 and her team prepared and integrated the Missile System and launched the Missile successfully. In a jubilant tone she said that the DRDO has produced and proven many new state of the art technologies in the Missile System like Composite Rocket Motors, very high accuracy Ring Laser Gyro based Inertial Navigation System, Micro Navigation System, Digital Controller System and very powerful onboard computer system. The Missile having capability to carry Strategic Warheads for the Forces and has provided a fantastic deterrence to the country and it will be produced in numbers and delivered to the Armed Forces as early as possible.

Well Done India on your newest success of perfecting launching the Agni-4 Missile.