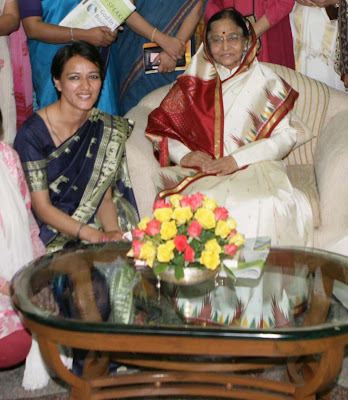 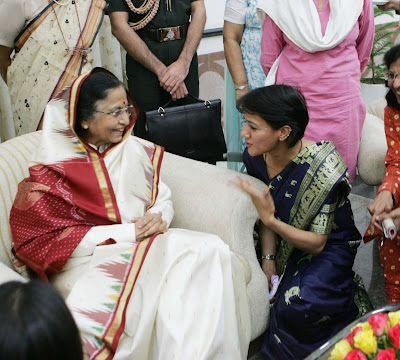 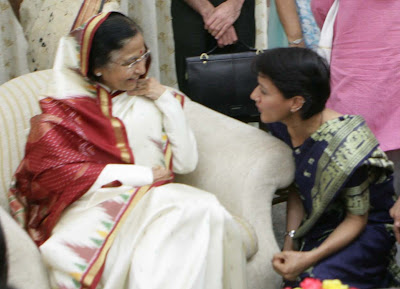 You look very cute Suman, with short hair and saree !!!

Sukhoi women? You flew with Madam President in a Sukhoi?

I had no idea that our President had adopted the Thai tradition of " Nang Kook Kao" when receiving guests.

KOOK KAO = On your knees

It's amazing how quickly we adopt traditions from other cultures. Small world indeed.

Whatever one may quote the reason but prez flight in MKI was a sheer wastage of tax payers hard earned money.

She must be labeled as the worst President in the history of India.She did nothing significant so far, instead wasting taxpayers money for her own fun and records.

This is what exactly happens when a dog was honored a prez chair.It shits every where.

you mean to say event worse than Shankar Dayal Sharma? who did nothing but visit all temples across the country along with presidential security. In his entire tenure did nothing but 'pooja-archa-bhajan'.

Dont worry about that loser archan. He is gay and spends all his time hanging around BRF and throwing warnings at people who dont respond to his advances. Weird fellow!!

Whats in the black bag?

Sadly this President who is supposed to be an iconic President is just a dumb figurehead. She pales in comparison to her MALE predecessor in everyway. She neither inspires the women of India, the youth of India or has anything intelligent to say. They might as well have installed any Tom, dick or harry's senile grandmother as President.

Could some one ask the President, the Supreme commander of India's armed forces, what has she done to safeguard the rights of service men and ex service men viv a vis one rank one pension, disability pension (for officers and soldiers) and benefits to gallantry award winners. Or what was her stand with regards to Anti AFSPA wave created by separatists.

Was she not proud of services of those men and women whose name she allowed being cancelled from the list of military delegation visiting China?
Does she disrespect their services that she by buckling to Chinese pressure that all people from A.P are chinese , and by canceling the visit of army personnel belonging to A.P, actually hints at foreign nationals masquerading a Indian armed forces personnel.

In fact the President;s post deserves a salute, but when a President is oblivious to her job, she maligns the salute received and the post apart from damage done for generations