I keep my date with Sam ! 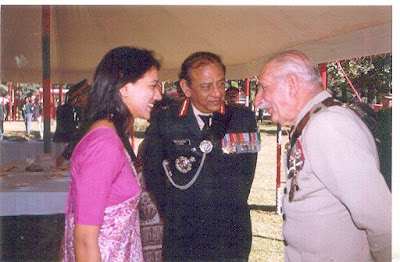 The oldest Field Marshal in the world, SHFJ Manekshaw, passed away last year after a prolonged lung disease, in Army hospital, Wellington.


On November 16, 1999, I met Field Marshal Sam Manekshaw for the first time. As his maroon Mercedes with five shining stars below the bonnet, screeched onto the road leading to the newly constructed war memorial of the Indian Military Academy (IMA), opposite Khetrapal Auditorium, early morning, we all stood up and I was left agape, partly by the stiff, upright and glowing officer and partly by the car he had alighted from. He had a certain aura about him. He had been invited to inaugurate the war memorial.

I went up to him during the tea break to wish him, when the then Deputy Commandant of IMA, Major General K K Karnik introduced me to him and said, "Here's our young instructor, who teaches the boys." Sam asked me, "What's your age young lady?" Seeing the media persons around him, I went close to him to whisper my age, to which he exclaimed if the boys listened to me or not. I just smiled, when Maj Gen Karnik chipped in saying, "Sir, the boys never miss her class." The Field Marshal, in his usual witty and flirtatious manner said, "I wouldn't either." I made an entry, of the biggest compliment in my life, in my diary, in red.

The same evening during the Dinner Night at the officer's mess of IMA, the Field Marshal went up to a newly wed bride of a young Captain, wearing a huge 'mangalsutra'. After exchanging the initial pleasantries with the ladies, Manekshaw went close to the new bride and saw the ornament closely and said, "Young lady I like your Kamasutra." The Captain's wife was embarrassed, and didn't know how to react.

At a bara-khana in a Gorkha unit, Manekshaw and his wife were invited, where a young, newly commissioned officer was made his wife's LO. At the end of the party, the young officer came up to the couple to ask Mrs Manekshaw her next day's programme and started fumbling 'Sir'...Ma'am'…'Sir'…..when Manekshaw turned to his wife and said, "Darling, take the young officer around and please show him that you don't have balls!!" ----A Garhwal Rifles Colonel posted in Delhi.

arey , I never missed your class either....Field Marshal nahin huye to kya hua? everybody has a part to play. Though I dont really remember what you taught..;-) but I am sure I had similar reasons as the FM himself.... he he he

by the way visit http://www.suryayyaar.wordpress.com