An Indian defence correspondent is on cloud nine after becoming the first woman to fly the Russian MiG-35 fighter jet. Suman Sharma’s chance of a lifetime came at an international air show in Bangalore.

As a defence correspondent, Suman Sharma is used to writing about planes, but after the recent Aero India Air show, it was everyone else writing about her, as shes made history by becoming the first ever woman to fly in a Russian-built MiG-35.

The invitation came as a complete surprise on what already promised to be something of a special day as she was at the show to take a flight in an American F-16.

”My physiological make-up was just for one flight, for F-16, for which I had been working for the last two years plus, but the MiG just came,” said Sharma, defence correspondent with South Asia Defence & Strategic Review. “It was like a reward for my first flight. They just saw my press accreditation and they came and asked me if I was carrying my medical certificates, to which I said ‘yes’ so they said they wanted to put me on their own plane and I was just too excited.”

Since taking to the skies in both aircraft, the question that's been on everyone's lips is which one is better, the American Eagle or the Russian MiG?

”I think they are just two different machines in terms of their avionics, but they are both highly advanced machines,” Suman Sharma says.

Asked which one was more fun to fly, Suman says to her both were ‘just great’.

”They gave me an out-of-the-world heavenly feeling and I just enjoyed both my flights,” she says.

Suman Sharma relives her experience in her mind every day. Her MiG certificate and badge, in recognition of her achievement, are rightly treasured. 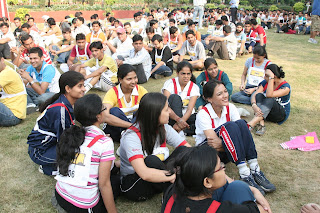 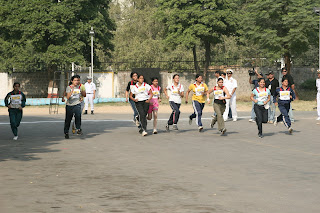 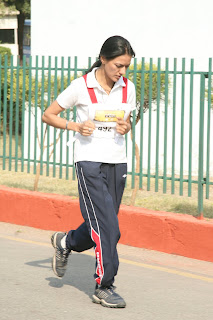 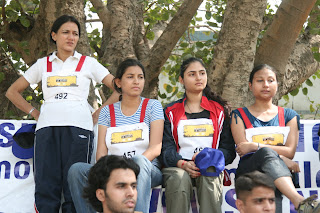 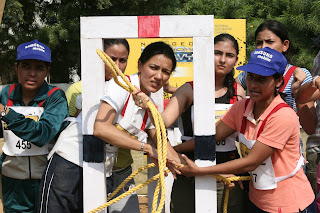 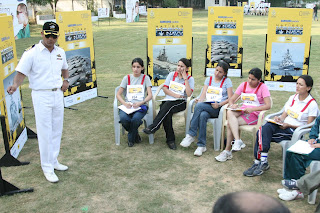 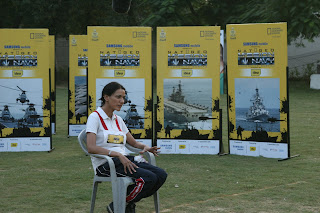 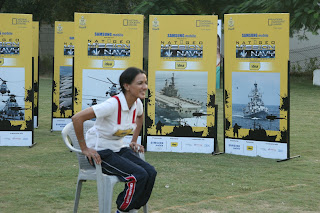 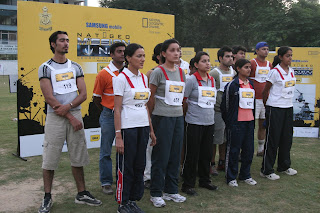 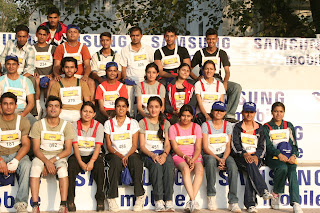 I cleared my services selection board (SSB) on October 12, 2008 in Delhi for National Geographic's Navy mission, from among 500 candidates. Being an old hand at SSBs,it was a cakewalk for me. The five-day SSB was compressed into one single day, which made it all that more tiring. Given the fact that I haven't been in touch with all this after my last SSB for selection in the Indian Army as an Education Corps officer, which I cleared twice from Bangalore's 24 Board, initially I found it a little tiring, but as they say in the armed forces, everything is mental and not physical. But good fun. It reminded me of my SSB days in Bangalore. There was everything, from 1.5 kilometer run, to 1.5 kilometer crawl-back run-sprint, ground tasks, group tasks, personal interview, group military planning which included a written plan and a group discussion.

My ultimate moment of triumph & glory !! 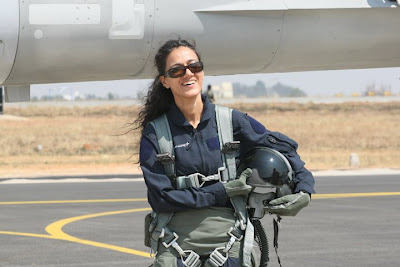 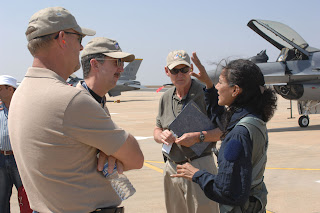 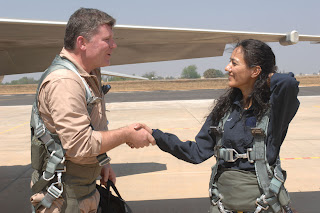 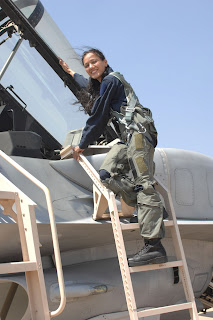 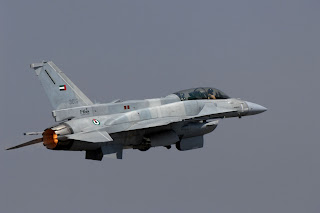 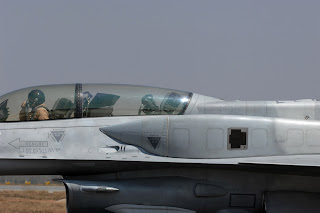 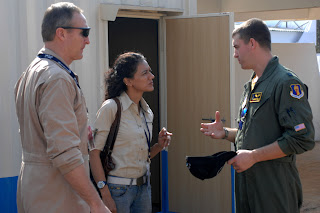 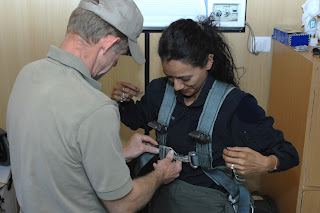 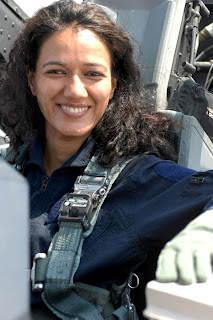 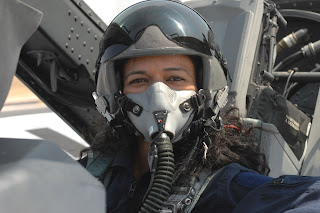 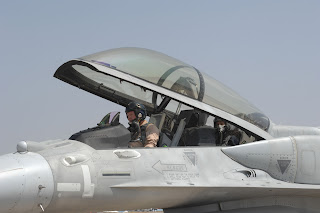 My flight was not about pulling Gs, as was the case with many who flew, but was as much about experiencing a new fighter machine, which is on offer for sale to the Indian government, as was experiencing the making of a historic moment.

Pushing myself through those 82 minutes of sheer enduring ecstasy, I realized I had all it takes to reverse engineer my life and get back to where I began from. From routinely experiencing the umbilical cord whiplash to fantasizing Tom Cruise and Sean Connery, my two year perseverance bore fruit on February 4, 2009, when I received a call from Lockheed Martin officials of my selection for a joyride in their all-new F-16IN 'Super Viper' on offer to the Indian Air Force (IAF) for its 126 fighter jet deal.

From putting in request applications with a story-line, to undergoing rigorous medical examinations, reading up about the aircraft, and following a strict diet and fitness regime, it took me months before I came face to face with the 47-year old dapper Paul 'Bear' Randall, who was to fly me into history. As I embarked the all-digital glass cockpit of the F-16IN Super Viper for a historic journey into self-discovery, my thoughts went out to the more than 800 women officers in the IAF in different non-combat branches, who were given permanent commission last year, with the hope that combat branches, inclusive of fighter flying, too would be considered for them in the future. I said a small prayer, after walking around the 'Super Viper', and jumped in.

Unsure of what a 'G' is, I boldly entered the portals of history on February 9, 2009, at 12 noon at the IAF base in Yelahanka, Bengaluru, during the Aero-India show. Bear, a former Commander with the US Navy, along with 'Boom Boom' (US pilots have a strange procedure of earning call-signs) subjected me to exhaustive pre-flight briefings about egress, eject and other procedures, after which I was strapped onto my seat by the flight safety personnel, Ricky, to begin the 40-minute sortie. At 12.15 pm the GE-132A engine with its 32,000 pounds of thrust ignited its way along the runway with full throttle and took a sharp right turn thereby inflating my G-suit.

My jazz training had taught me to contract my lower body and my years of yoga had taught me controlled breathing, all of which was handy during my G experiences, coupled with my special diet of vegetable juices, milk and fruits, and proper hydration of the body a night before the flight, helped me keep alert and wide-eyed during the sharp turn, after which Bear told me that I had just experienced 6G. I was glad of being totally in command of myself.

The large coloured screens beaming data in front of me displayed the .9 mach speed of the Viper, as Bear tore the south Karnataka skies and rolled. The newly introduced automated recovery system which gives the plane an edge over the legacy F-16, as it warns, takes off automatically and saves the machine and lives from crashing, is what caught my eye particularly.

Bear roared towards Mysore, covering a total of 90 miles, while I kept trying to identify targets tracked by the APG-80 AESA radar. Touching 20,000 feet through a vertical nose-up gave me a 'heavenly' and a 'divine' feeling, after which Bear asked me to fire ammunition from the right onto my left screen as there was an air target visible. I promptly obeyed as I was waiting for this moment, after which it was my turn to handle controls mid-air. I played with the stick as the Viper yawed.

An hour in Bangalore's Command Hospital centrifugal chamber in 2006, an F-16 simulator in the US in 2008 and again in Delhi last year, along with playing with simulation software on my laptop helped me mid-air.

After having experienced what a G-force is, little did I know that my second flight in Aero India-2009 would effortlessly land in my lap so soon, thereby inching me ahead towards realizing my dream of flying all the six contenders in the more than 10 billion US dollar deal for the world's single largest defence deal. Of the American F-16 and F-18, Swedish Gripen, Russian Mig-35, French Rafale and the Eurofighter Typhoon from the EADS, I had already made history by becoming the first Indian woman to co-pilot the F-16IN Super Viper, three days after which I embarked on yet another historic journey by getting into the Mig-35 cockpit, which incidentally has never allowed women into it.

Having spoken to former pilots, and understanding the importance of physical fitness, which incidentally was never a challenge for me, given the fact that I came from a services background and dedicated more than two years of my life in the Indian Military Academy, I was more than fighting fit and kept up with my breathing, relaxation and meditation techniques before the flights. I attribute my cantonment life to being exposed to fighting machines, which turned into a passion for fighter jets and flying them.

Mikhail Belyaev, 41, formerly with the Russian airforce, with more than 2000 hours, explained me the procedures before setting the two engines afire. I could hear Mikhail communicating on ground frequency, about Foxtrot-9 (our call sign for this mission), being ready for line-up and thereafter take-off.

Foxtrot-9 was given a go-ahead and at 1.20 pm our plane with its 9000 kgf thrust with afterburners (and 5,400kgf dry thrust) took off thereby inflating my G-suit. On February 13, 2009 I became the first woman in the world to co-pilot a Mig-35 fighter. I had already tested myself for a 6G pull in my previous flight, and since I was ok, I had told Mikhail to take it a little further from there. I consider fighter flights more a test of mental endurance rather than physical.

After having earned a flight certificate for handling the Super Viper I was confident of going ahead with the most dangerous and unforgiving sport on the planet, and thus began my tryst with de-construction into the insight of a superb co-existence of man and machine. With side rolls at about 8000 feet, we dived for a 360 degree vertical. I contracted myself on one such turn, to avoid the blood being drained from my brain downwards, and realised I had touched a 7 G-force pull, which was my maximum on this flight.

But there was more in Foxtrot-9's mission.The 42-minute sortie of the Mig-35 'E-154' with its pod installed with laser and infra-red illumination, went upto 20,000 feet, and I could feel the aircraft cutting through the clouds. I was given the controls. I smoothly maneuvered the plane from left to right and vice versa, experiencing minor Gs in the process. The plane, capable of performing the 'Cobra' with precision, then did a low-level with a high angle of attack at 28 degrees.

Before Foxtrot-9 could announce landing, I insisted Mikhail to attempt a half-Cobra, which he did. The vertical pull-up pumped blood faster than expected into my upper body, for a split second, but I was comfortable. The maneuver convinced me of my mental and physical endurance which I tested on both my flights put together. On the coloured laser-infrared screen I could see ground targets which were detected by the AESA radars, but I was told not to touch anything red, black or yellow inside.

It was time for Foxtrot-9 to return back, but not before it had run along the runway at low-level, soaring up again and then making a safe landing. That too was part of the mission. Clouded with thoughts of breaking the sound barrier, which was refused by Bear on my first flight citing requirement of special permission, to flying all the six competing aircraft and pulling negative vertical Gs with improved fitness levels in my future flights, I made a safe landing. With the Russian media waiting, who compared me with Valentina Tereshkova, the first Soviet woman cosmonaut, I landed realizing that I had broken the barrier or rather the jinx of women not being flown in the RAC-Mig-35 plane on Friday the 13th !!

The Ruskies go all out !! 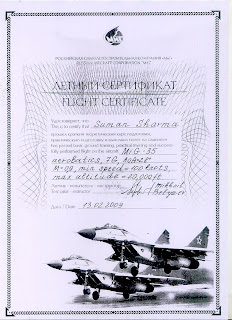 I made history on February 13, 2009 at 1.20 pm , by becoming the first woman in the world to enter the Mig-35 cockpit and co-pilot it with Major Mikhail Belyaev , formerly with the Russian airforce. We attempted a half-cobra during our 42-minute sortie. I pulled 7 G on this flight of mine.

My 6G moment in the F-16IN Super Viper

On February 9, 2009, in Yelahanka IAF Base, Bangalore, at 12.15 pm, I became the first Indian woman to co-pilot the F-16IN Super Viper, along with Commander Paul 'Bear' Randall , former ly with the US Navy. I was given this certificate at the end of the 40 minute sortie, covering 90 miles, at .9 mach speed, 20,000 feet altitude, barrel roll, vertical nose-up and firing ammunition. I handled controls mid-air, south of Karnataka, towards Mysore.